Demonstrating the Thickness of Atmospheric Layers 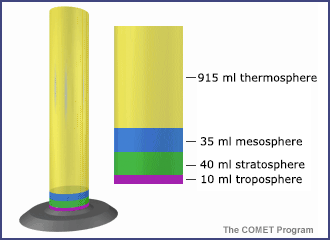 Earth's atmosphere has layers, each with its own specific traits. Moving upward from ground level, these layers are named the troposphere, stratosphere, mesosphere, and thermosphere. Some scientists also count the exosphere, the faint uppermost reaches of the atmosphere that gradually fades into space, as a fifth layer... however, the exosphere is not included in this activity.

This activity demonstrates the relative thickness of the thin section of the atmosphere that includes the troposphere and stratosphere. These layers are essential to all life on Earth.

This activity was developed as part of Project LEARN at UCAR. It includes graphics created by the COMET Program at UCAR.