Students create graphs of sea ice extent data for the Arctic and Antarctic, learning about both annual, seasonal cycles and longer-term trends. Visualizations complement the data analysis, allowing students to view animated maps of the data. 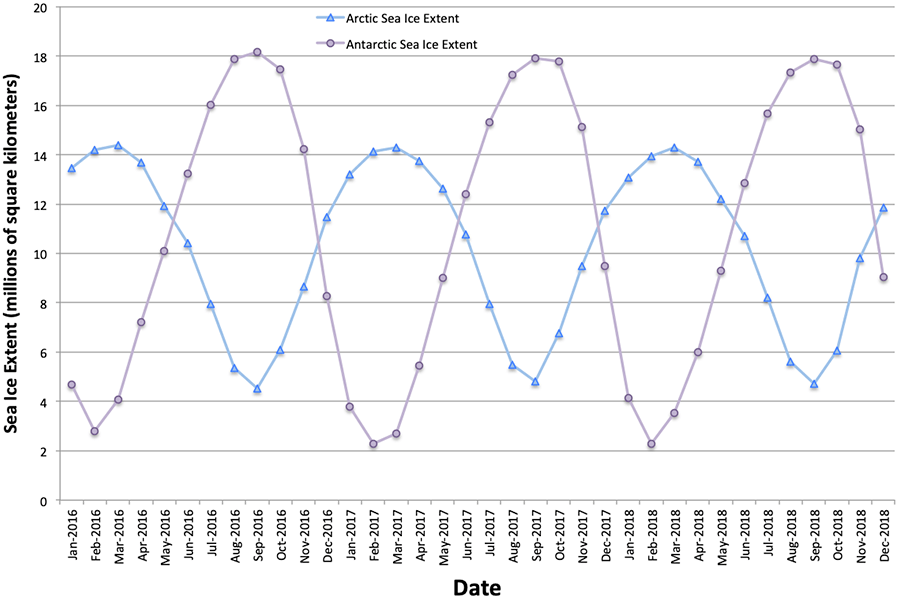 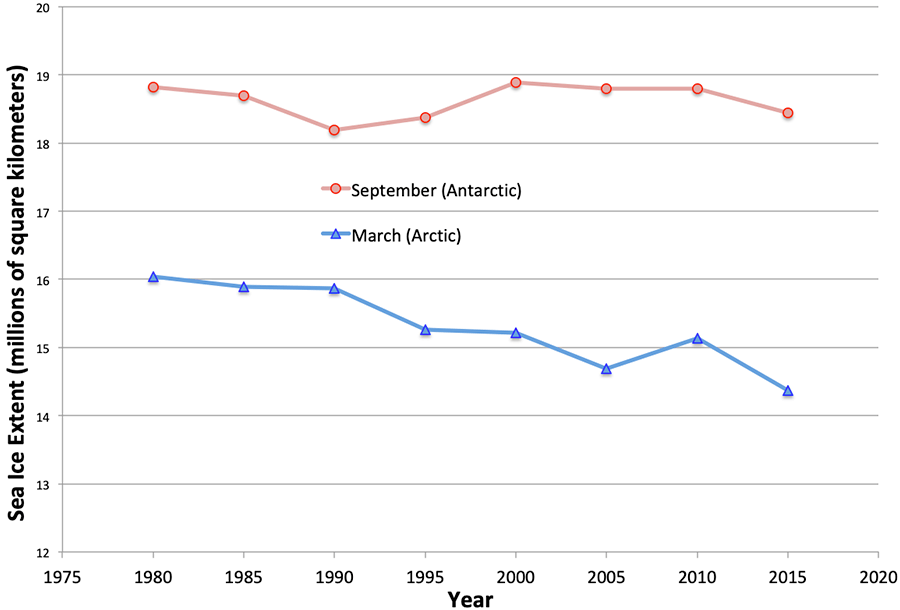 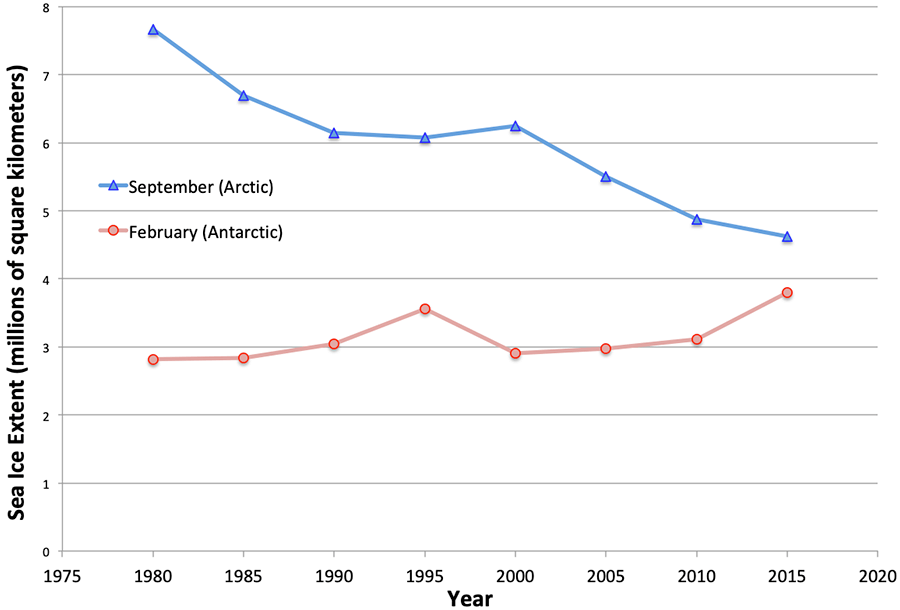 Formative assessment: Look over the sketches students make for the three-year duration, month-by-month graph of sea ice extent in the Arctic. These "hypothesis" sketches will reveal their preconceptions and can help you know what to emphasize throughout the rest of the activity. Some possible student sketches, and what they reveal about student thinking, include:

Formative assessment: Review student hypothesis sketches of monthly sea ice extent in the Antarctic. They might reveal that:

When you ask students to describe any long-term trends in the data, they should notice a significant decline in Arctic sea ice extent in September. The Arctic ice extent has also been declining in March, but less dramatically than the September value. Your students might not notice the more subtle slope of the Arctic-March plot. There is not a clear trend, either rising or falling, in either the February or September data for the Antarctic. The Background Information section of this activity provides numerical values about the long-term rates of change of sea ice extent for both hemispheres.

Discussion topics and links to mathematics

When you ask students to predict when in the future the Arctic might be ice-free in September, discuss with them the reliability of their predictions. A simple, linear extrapolation based on such a limited set of data might not be especially reliable. You may want to discuss, at this point, various mathematical and scientific concepts, such as:

In this activity, students work with data about sea ice. Sea ice is floating on the surface of the ocean and forms as seawater freezes. When floating sea ice melts, it does not change sea level to any significant degree, unlike ice on land, such as mountain glaciers and the vast ice sheets on Greenland and Antarctica. When ice on land melts, the water flows into the ocean, raising sea level.

Melting sea ice amplifies climate warming. The open ocean that is exposed when the sea ice melts is much darker than ice, so it absorbs more sunlight, heating the ocean water and causing yet more ice to melt. This vicious cycle is called the ice-albedo feedback loop.

When students first estimate the seasonal variation of the extent of sea ice in the Arctic (before they are given data), they should realize that the ice melts and shrinks in the summer and freezes and grows in the winter. Thus, their predicted minima are likely to be somewhere around the summer, and their predicted maxima should be somewhere around the winter. In the Arctic, the yearly maximum generally occurs towards the end of winter or early spring, usually in March. The maximum is not in the middle of winter when the temperatures are coldest. The ice pack continues to grow throughout the winter, thus reaching its maximum extent late in the winter season. Also, realize that water has a lot of thermal inertia and the Arctic Ocean does not cool down as quickly as does the air in the Arctic. Most students probably will not take these factors into account when they make their predictions. Consequently, students may predict that the sea ice maximum occurs in December, January, or February. Some perceptive students might take this lag into account for their predictions, and it would be good to call upon them to explain their predictions to the rest of the class. If none of your students take this lag into account when forming their hypotheses, make sure to point out the discrepancy between their predictions and the plot of actual data. Lead the students through a discussion of this lag and the causes of it. Likewise, their predictions for the time of minimum sea ice extent might be in the middle of the summer, instead of the actual minimum which usually occurs in September. Similar to the winter "lag", the summer temperatures, though highest in mid-summer, remain above freezing throughout the summer and into early fall, so the sea ice continues to melt and its extent continues to shrink. Also, the Arctic Ocean, which warms throughout the summer, holds its heat longer than does the atmosphere into the cooling autumn.

There are substantial differences between the Arctic and Antarctic that influence the extent of sea ice packs in the two opposite polar regions. The central portion of the Arctic is all ocean, whereas, in the Antarctic, there is a continent (Antarctica) in the middle. The area closest to the North Pole includes the sea ice in the Arctic. However, the sea ice area in the Antarctic is found around the edge of the continent and doesn't include the coldest region in the "center" nearest the South Pole. Also, the heat retention properties of a large landmass and a massive ice sheet (in Antarctica) are very different than those of a large body of water (the Arctic Ocean). Ocean currents are also quite different in the Arctic versus the Antarctic. The Great Southern Ocean circles Antarctica without ever colliding with major land masses, so it forms a ring around Antarctica and insulates the continent from being warmed by ocean currents flowing down from warmer latitudes. In the Arctic, on the other hand, some ocean currents flow into and out of the Arctic Ocean basin, carrying warmer water into the basin and removing colder water from the basin. The net effects of these differences are not straightforward but can be used as discussion points with your class. 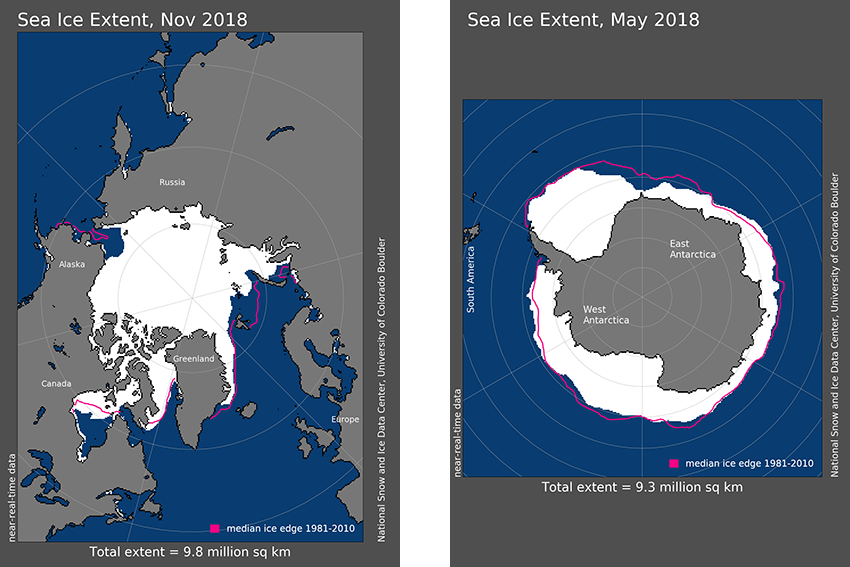 Figure 4: Typical Sea Ice Extent for the Arctic and Antarctic

Figure 4 shows typical sea ice extent in the Arctic and Antarctic. Each map shows the extent of sea ice when the ice area is about halfway between the annual minimum extent and the annual maximum. Show students these two images near the start of the activity to provide them with a baseline sense of ice extent that they can refer to when exploring minimum and maximum extent. Notice that although the total area covered by ice is similar in each of the two polar regions (9.8 vs. 9.3 million square km), the shape of the sea ice pack is very different between the Arctic and Antarctic. As described above, the sea ice in the Arctic clusters towards the middle of the Arctic Ocean basin and covers the North Pole, whereas the sea ice in the Antarctic forms a rough ring around the continent of Antarctica.

When students analyze the long-term trends in Arctic and Antarctic sea ice minima and maxima, they should readily spot the decreasing trend in the Arctic minima in September. The other patterns are less clear, especially for the Antarctic data. Scientists, who have done a rigorous mathematical analysis of these trends, report the following average rates of change in sea ice extent, expressed in terms of average percent change per decade.

Why is the minimum sea ice extent in the Arctic rapidly dropping, while the extent in the Antarctic seems to be holding steady? The geography at each of Earth’s two polar regions is very different. The North Pole is surrounded by ocean and covered by a fairly thin layer, at most a handful of meters thick, of floating sea ice. The South Pole is on the continent of Antarctica, which in most places is covered with ice that is more than a kilometer thick. As Earth’s climate warms, ocean temperatures rise. Warming ocean waters flow beneath the Arctic sea ice throughout the Arctic Ocean basin, helping to melt sea ice all across the Arctic. Near Antarctica, on the other hand, the warmer ocean waters only interact with the floating sea ice around the edges of the continent. Because of this more limited contact between warming ocean waters and sea ice, the Antarctic is less prone than the Arctic to show the early effects of a warming climate.

The extent, in terms of area, is just one measure of the amount of sea ice. The thickness of the ice is also an important indicator of the reduction of ice mass. Ice builds up from one season to the next, never melting entirely in the summer, and can be several tens of meters thick. This “old ice” is much more resistant to melting away if there happens to be an unusually warm year or two. “Young ice”, which forms when open water freezes over in the winter, is typically much thinner - only a meter or two in depth. Thin ice like that can easily disappear whenever a warm season comes along. The amount of old, thick ice in the Arctic has been dropping rapidly in recent years, along with the area of ice extent. Some of the data at the NSIDC website portrays ice thickness if you want to investigate further.

Sea ice is just one of the interconnected aspects of the polar environments. Changes in sea ice extent and thickness alter other parts of high-latitude environments. For example, thinner sea ice coverage means more sunlight reaches photosynthetic plankton beneath the ice, changing their rate of growth and reproduction. Changes in sea ice coverage can also alter ocean currents, which in turn influences the flow of heat into and out of the polar regions.

To shorten the duration of this activity, you can have students plot only one year of monthly data from Tables 1 and 2. Or, you could have different students graph different years and then compare graphs to find that the pattern is the same.

When making predictions (hypotheses) about monthly Antarctic sea ice extent, many students may not take into account (or may not understand) the differences in seasons between the Northern and Southern Hemispheres. This can provide you with a very "teachable moment", and a great opportunity to discuss the cause of the seasons. The seasons occur because of Earth's axial tilt and not variations in Earth's distance from the Sun. If the latter was the cause, both hemispheres would have the same seasons.

If you want to extend this activity, the website of the National Snow and Ice Data Center (NSIDC) has more data than we have presented here. You could have your students plot and analyze data for years or months that our data sets do not include, or for the most recent months. In this activity, students plot annual data at 5-year intervals, which saves time by reducing the number of points students must include. However, the data for every 5th year might not always be representative of the preceding and following years. Have students plot annual data for every year and compare that to a graph at 5-year intervals. Discuss the differences between the two graphs. Figure 5 shows annual maxima data plotted at yearly intervals, and Figure 6 shows the annual minima. 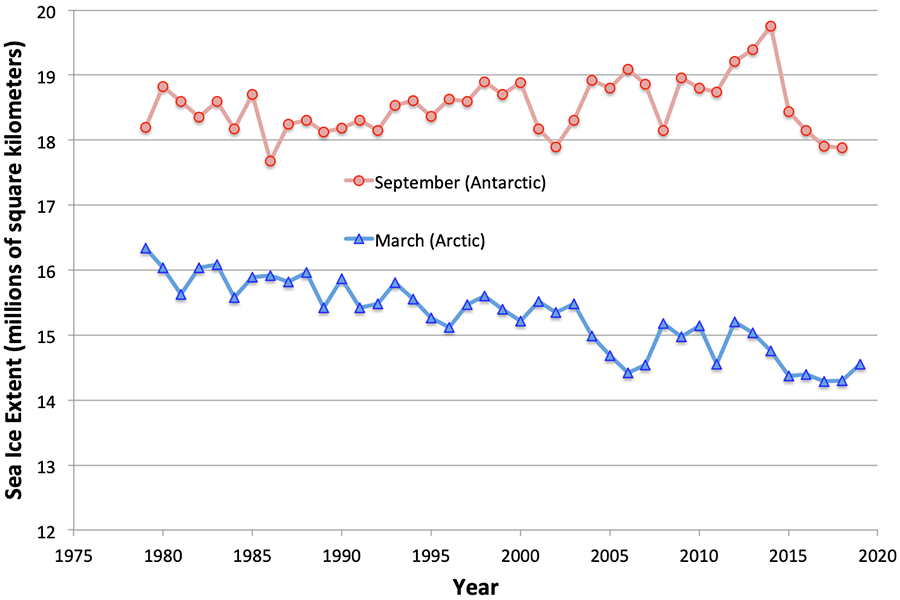 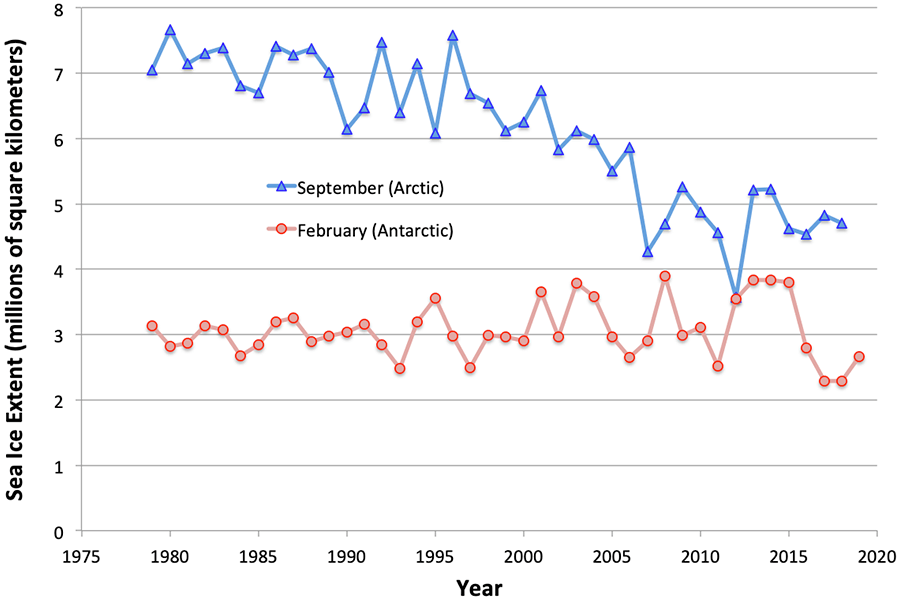 Mathematically advanced students could do a least-squares fit of a line to each (maximum and minimum) of the trends in the Arctic sea ice extent data to be more rigorous in their estimates of when the sea ice might be expected to disappear in the summer.

As an alternative to separate graphs of sea ice minima and sea ice maxima, have students plot all of the minimum and maximum data on a single graph (as in Figure 7 below). This approach requires less graph paper and fewer worksheets. However, the decline in Arctic minimum extent is less visually dramatic when viewed this way. Students might need extra prompting to recognize the significant decrease in sea ice extent during recent decades.

Figure 7 shows the four datasets all plotted together on the same graph. Figure 8 shows the same graph, but with data filled in for every year instead of 5-year intervals. 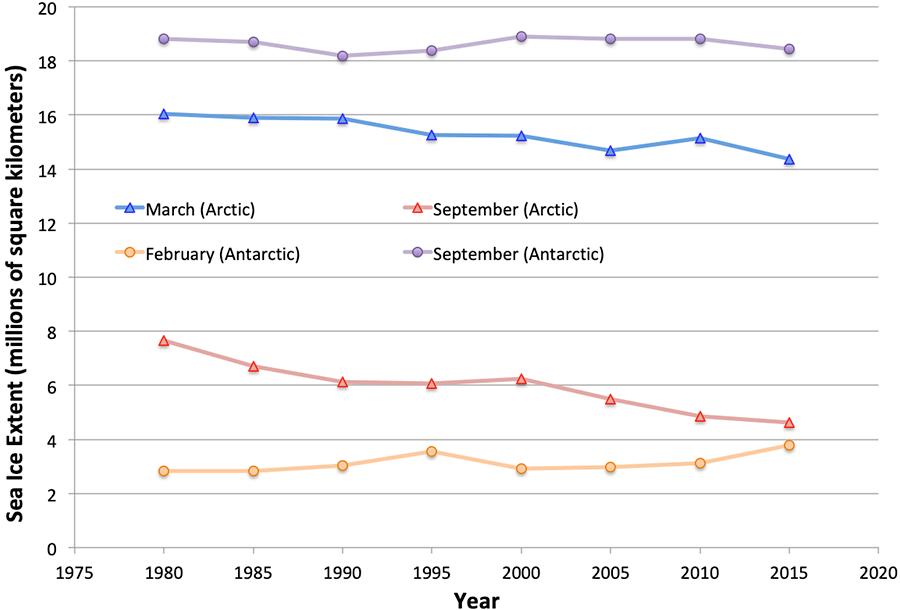 This activity was developed by Randy Russell and updated by others at the UCAR Center for Science Education. Sea ice data is from the National Snow and Ice Data Center (NSIDC).