Hunting for the Pineapple Express

In this activity, students identify the location of an atmospheric river(called the Pineapple Express)over the Pacific Ocean by analyzing water vapor data collected by COSMIC satellites. Based on their analysis, students make a prediction about where the atmospheric river will make landfall and then check their prediction by examining rainfall data along the U.S. West Coast.

Part 1: Set up the situation. 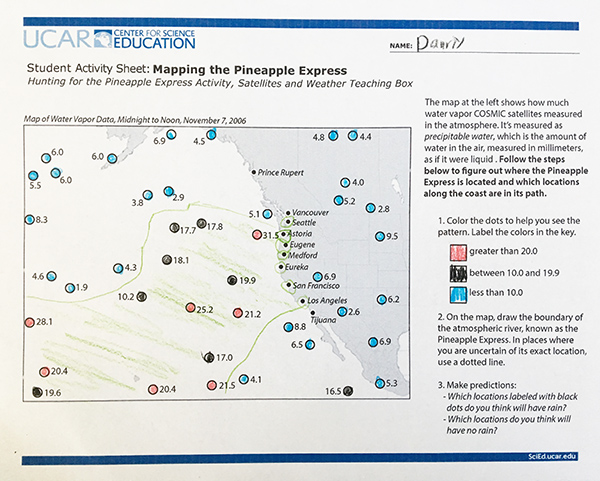 Imagine a river in the sky - one made of water vapor, instead of liquid water. That’s an atmospheric river and it can transport moisture long distances.

Over the North Pacific, atmospheric rivers transport water vapor over the ocean to the West Coast of North America. When the moisture gets to land, it’s pushed upward, which causes much of the water vapor to condense, forming intense precipitation. Heavy rain and snow can cause hazards like floods but is also beneficial for agriculture and drinking water supplies.

Why is it called the Pineapple Express?

The atmospheric river pattern over the North Pacific is often called the “Pineapple Express” because it moves moisture from Hawaii, where pineapples are grown, to the west coast of the United States and Canada, where it can cause heavy rain and snow.

In this activity, students analyze humidity and rainfall data from a particularly intense atmospheric river over the Pacific that caused heavy precipitation in northwest Oregon, Washington state, and southern British Columbia from November 6-8, 2006. Mudslides and flooding were widespread. Eleven counties in Washington were declared national disaster areas. In Mount Rainier National Park, floods washed out roads and campgrounds.

About COSMIC satellites and data

COSMIC is a group of small satellites (called microsatellites) that measures how radio waves from GPS satellites bend while traveling through the atmosphere in order to deduce the characteristics of the atmosphere, such as the temperature and amount of water vapor. Because COSMIC is able to make these measurements for different altitudes in the atmosphere and over the ocean - places where weather data is sparse - the data has an important role in helping meteorologists predict weather and is added to weather models to make forecasts more accurate.

This data exploration is based on the weather events and COSMIC data described in two papers:

This activity was written by Lisa S. Gardiner of the UCAR Center for Science Education with data retrieved by COSMIC scientist Hannah Huelsing and UCAR educator Renee Curry Minaya and was inspired by the research of Neiman et al. (2008) and Ma et al. (2011).

Middle School
Back to Top