Place blocks into bins or bowls.

These instructions presume that groups of 7 students will participate in the activity. The activity can readily be modified for smaller groups of 5 or 6 students as follows:

Arrange students into groups of 5-7 students per group. In each group, assign students to the following roles:

The block-stacking task is the same for each simulated computer system, both the 4-6 person parallel processing group and the serial processing "group" of one student. The task is to assemble the blocks into the longest possible stack, with blocks of the same color grouped together within the overall stack. Each of the individual members of the parallel system will work on separate parts of the task and then have a few moments to coordinate their work and complete the task in unison.

Allow students to discover, during the course of the activity, that the parallel processor is much, much faster at completing the task than the single, serial processor. The student who represents a single processing computer will only have a fraction of the block-stacking task completed when the parallel processing group is done with the task. This is a very unfair, uneven race; make sure the student who serves as the single, serial processor understands that she or he is in no way at fault for being much slower to finish the task.

Single processor systems have just one processor (computer chip). Although modern processors are very fast, performing calculations in milliseconds or less, these systems are still limited in speed. The processor performs one calculation at a time, then loads some new data and performs another calculation. It does this in a rapid-fire fashion, over and over and over again.

Parallel processor systems, on the other hand, can have many computer processors working in tandem. Part of the computer breaks each big problem down into many smaller calculations. The central processor then assigns each of these smaller calculations to one of many processors. Each processor works on its share of the problem by itself, at the same time as all the other processors. When the processors are done with their small calculations, they report their results back to the central processor, which then assigns them more work. Although a small amount of performance is lost due to the need to coordinate tasks, the overall increase in computing efficiency is very, very large when tackling complex computational projects. 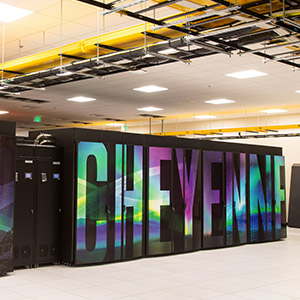 As an example, NCAR's Cheyenne supercomputer, which began operations in January 2017, has more than 140,000processors.

Supercomputers with many parallel processors are used to run models of extremely complex systems. Examples include:

This activity was developed by Marijke Unger of the Computational & Information Systems (CISL) Lab at the National Center for Atmospheric Research (NCAR) and Tim Barnes of the UCAR Center for Science Education.