This is Part 1 of Lesson 3 of Project Resilience curriculum.

Students investigate how the combined effects of sea level rise and sinking land are projected to impact the Louisiana coast this century.

Navigate from the previous activity:

Since 1900, sea level has risen between 1 and 2 millimeters per year (10-20 cm per century) on average, which is ten times faster than sea level rise over the previous 3,000 years. Looking into the future, models project the rate of sea level rise will increase, although the amount it will rise largely depends on the amount of warming.

Scientists use averages from a large number of tide gauges worldwide to estimate the global average sea level. Since 1992, global sea level has also been observed using satellite data too, with more accurate results than tide gauges (according to the Intergovernmental Panel on Climate Change AR4 report). Satellite measurements show a rate of sea level rise of 3 mm per year, far more than the tide gauges. Some scientists suspect that the satellite is incorrectly calibrated. Others suspect that the difference may be because the satellite measurements cover much of the globe while tide gauges are near coastlines.

The graph below shows the global mean sea level rise estimates due to melting ice and thermal expansion for four scenarios (according to Parris et al., 2012). Notice that there is a wide range in the scenarios, in part because there are unknowns about how much we will decrease greenhouse gas emissions in the future, and in part because of the possibility of the Antarctic and Greenland ice sliding into the ocean. Notice also that the rate of sea level rise is likely to be non-linear, with an increasing rate of sea level rise over time. 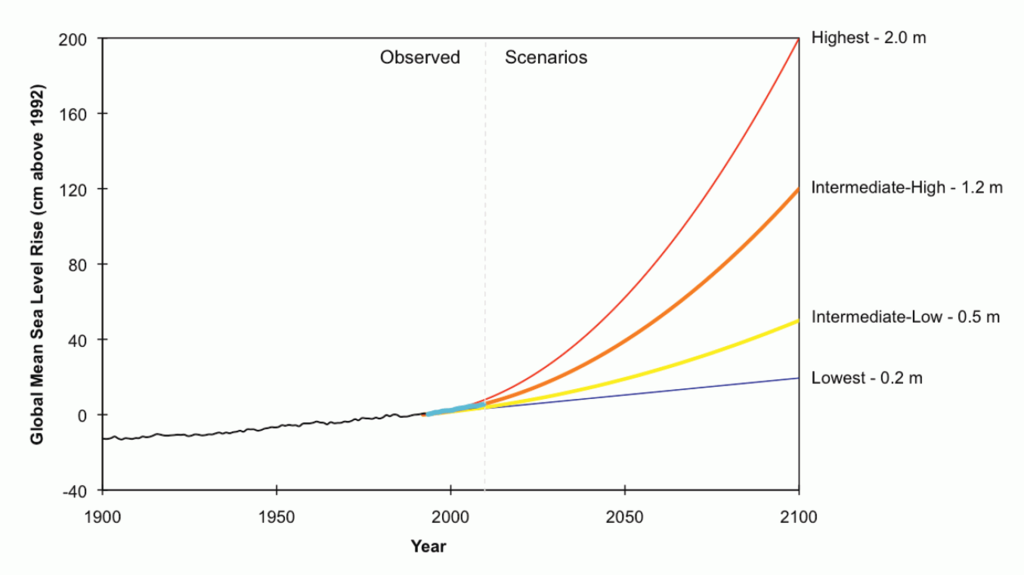 In this lesson, students look at sea level projections for two timeframes (2060 and 2100) to focus on the most vulnerable areas of the coast. You may wish to extend student learning on this topic by having students analyze and interpret the graph above.

There are two ways that a hotter climate leads to sea level rise: (1) as temperatures warm, ice that is on land melts and the water is added to the ocean, and (2) as the water in the ocean warms, it expands. Both are described below in more detail.

There are between 24 and 30 million cubic km of ice on land. About 90% of this ice is in Antarctica. Most of the remaining ice is in Greenland, and a tiny fraction is locked up in mountain glaciers elsewhere. As global temperatures rise, some of this ice is melting, and the meltwater flows into the ocean, gradually raising sea level. Melting has outpaced snowfall, and the most substantial loss of ice has been on mountain glaciers in the mid-latitudes and tropics and on the Greenland ice sheet.

Additionally, warmer temperatures can cause ice in glaciers and ice sheets to flow faster towards the oceans. In Antarctica, ice is now flowing towards the ocean at a faster rate than in the past. Complete melting of glaciers and ice sheets would raise sea levels worldwide, almost 70 meters (230 feet) above current levels. Of this rise, 7.2 meters would be from the Greenland ice sheet, and 61.1 meters would be from the Antarctic ice sheet. Melting glaciers would add another half of a meter.

For some perspective on all this melting ice, consider this: sea level has risen about 120 meters since the last glacial maximum (approximately 20,000 years ago) when ice covered large parts of the Northern Hemisphere and wooly mammoths roamed the Earth.

Note that melting sea ice, which is ice formed from sea water, does not affect the sea level since the ice is already in the water.

Water expands as it gets warmer, and it is warmed as the climate warms. The amount the water warms is very small, but since there is so much water in the ocean, it expands a lot. Scientists estimate that nearly half of sea level rise is due to thermal expansion of sea water.

For example, suppose 1 liter of water, initially at 20° C, was heated to 21° C. It would expand by 0.021% (see the table of volume and temperature). It would increase in volume by 0.21 milliliters. This tiny increase seems trivial, but the ocean contains about 1,400,000,000 cubic kilometers of water. Even a tiny fractional increase adds up to a very large increase in volume, and hence substantial sea level rise.

The different layers of the ocean (surface layers and deep ocean) are not heated equally. Also, the volumes of the various layers are not the same, nor are their initial temperatures, which affects the rate at which they expand. 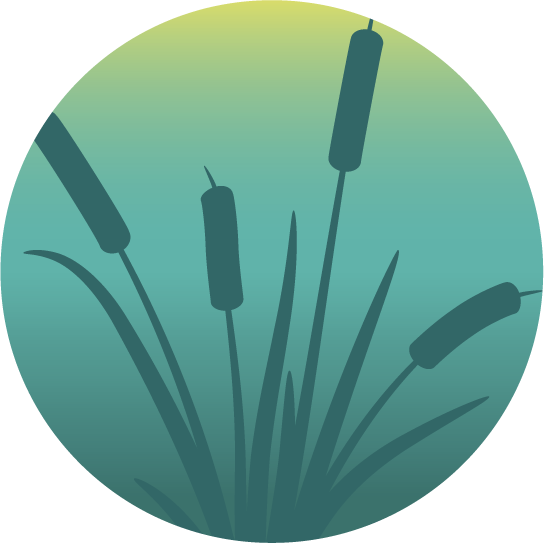