Students read news articles about Hurricane Irene, present information with classmates, and construct a timeline to describe the hurricane’s story over time and across geographic area, exploring what happened, how people were affected, and how they reacted.

Students understand how data (information from news articles) about a natural hazard (a hurricane) can describe how people in coastal communities were warned, affected, and mitigated the impacts. 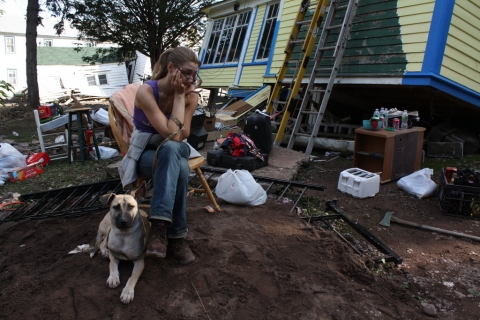 Anastasia Rikard was inside her house in Prattsville, N.Y., when, weakened by flooding from the storm, it tipped over on its side.
Credit: Noah Rosenberg for The New York Times

Use of evidence to critique claims

Adaptation for high interest/low reading level: Use headlines only and locations of articles and have them make the timeline with only headlines. Read several of the articles as a group and discuss how news covers weather stories like Hurricane Irene.

In late August 2011, Hurricane Irene traveled through the Caribbean and up the East Coast of the United States. It was an unusual storm because it made landfall many times along its path. This led to news coverage from many different areas.

About Hurricanes in the Atlantic

Hurricanes, the name for tropical cyclones in the Atlantic, are intense storms with high winds, torrential rains, and low pressure. Hurricanes in the Atlantic usually start as thunderstorms and other atmospheric disturbances in the tropical Atlantic Ocean off the west coast of Africa and grow into tropical depressions. With high enough winds, a tropical depression becomes a tropical storm. With even stronger winds, the storm becomes a hurricane. Hurricanes rotate around an “eye” (a calm area with light winds and fair weather). When hurricanes come onshore, the heavy rain, flooding, strong winds, and large waves can cause massive damage. In the Atlantic, the hurricane season is from June 1 until November 30 each year.

One reason that hurricanes take paths that curve either into the Gulf of Mexico or up the Atlantic Coast is because of the location of high and low-pressure systems. The winds flowing around highs and lows can steer hurricanes. High-pressure systems are the thickest parts of the atmosphere, while low-pressure systems are the thinnest. The Bermuda High is an area of high pressure that moves east and west in the North Atlantic Ocean. During the Northern Hemisphere summer and fall, it sits over the western part of the North Atlantic Ocean, near Bermuda. Since the hurricanes are steered by the winds around a high, the Bermuda High impacts the track and size of hurricanes. It can make them move up the east coast of the United States.

Why Is Weather in the News?

News media outlets (including newspapers, T.V. news, websites, blogs) carry stories about the weather for several reasons. Of course, weather forecasts for the next several days are a staple in the news (everyone wants to know if they should bring an umbrella!), but when there is a severe weather event, news media outlets carry the story with different sorts of coverage. There are forecast reports, and also stories about how communities are preparing for the event and the devastation that the event caused.

Severe weather events such as hurricanes have paths that are predicted days in advance. The weather event is in the news for days or even weeks. The stories usually have an angle such as (1) reports of storm prediction from meteorologists, (2) reports of community warnings and preparations, (3) reports on the storm during the event, (4) reports of the aftermath – the people affected and their efforts to recover.

Crosscutting Concepts: Cause and Effect, Stability and Change, Influence of Science Engineering and Technology on Society and the Natural World (All human activity draws on natural resources and has both short and long-term consequences, positive as well as negative, for the health of people and the natural environment)