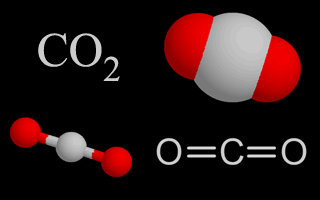 Four representations chemists use for carbon dioxide. In the colored models, carbon is light gray and oxygen is red.
Credit: Randy Russell (©2006 NESTA)

Carbon dioxide is a colorless and non-flammable gas at normal temperature and pressure. Although much less abundant than nitrogen and oxygen in Earth's atmosphere, carbon dioxide is an important constituent of our planet's air. A molecule of carbon dioxide (CO2) is made up of one carbon atom and two oxygen atoms.

Carbon dioxide is an important greenhouse gas that helps to trap heat in our atmosphere. Without it, our planet would be inhospitably cold. However, an increase in CO2 concentrations in our atmosphere is causing average global temperatures to rise, disrupting other aspects of Earth's climate.

Atmospheric carbon dioxide concentrations have varied substantially through Earth history, which had profound impacts on climate and life.

Carbon dioxide plays a key role in Earth's carbon cycle, the set of processes that cycle carbon in many forms throughout our environment. Volcanic outgassing and wildfires are two significant natural sources of CO2 in Earth's atmosphere. Respiration, the process by which organisms liberate energy from food, emits carbon dioxide. When you exhale, it is carbon dioxide (amongst other gases) that you breathe out. Combustion, whether in the guise of wildfires, as a result of slash-and-burn agricultural practices, or in internal combustion engines, produces carbon dioxide.

Photosynthesis, the biochemical process by which plants and some microbes create food, uses up carbon dioxide. Photosynthetic organisms combine CO2 and water (H2O) to produce carbohydrates (such as sugars) and emit oxygen as a by-product. Places such as forests and areas of the ocean that support photosynthetic microbes, therefore, act as massive carbon "sinks", removing carbon dioxide from the atmosphere via photosynthesis. Earth's early atmosphere had much higher CO2 levels and almost no oxygen; the rise of photosynthetic organisms led to an increase in oxygen which enabled the development of oxygen-breathing creatures such as us!

Small canisters containing pressurized CO2 are used to inflate bicycle tires and life jackets and to power paintball guns. The "fizz" in soda pop is supplied by carbon dioxide. Carbon dioxide is also released by yeast during fermentation, giving beer its head and making champagne bubbly. Because it is not flammable, CO2 is used in some fire extinguishers. Carbon dioxide forms a weak acid, called carbonic acid (H2CO3), when dissolved in water.

Carbon dioxide is the most abundant gas in the atmospheres of Mars and Venus. Solid, frozen carbon dioxide is called "dry ice". The polar ice caps of Mars are a mixture of normal water ice and dry ice. Liquid CO2 only forms at pressures higher than about 5 times the atmospheric pressure on Earth at sea level, so in many situations dry ice does not melt into a liquid form. Instead, it goes directly from a solid state to a gaseous state in a process called sublimation.