In the 1960s, colorful Peruvian fishing boats returned to shore each day heavy with thousands of anchovies. On larger boats the anchovies could be put in a hold below deck. On smaller boats, the fishermen, nets, and anchovies were on deck together and seabirds soared above, looking for a snack. Fish are very important to the coastal Peruvians because the climate is dry and it's hard to farm the land.

But in 1972, the boats returned to shore with empty nets and disappointed fishermen. Seabirds couldn’t find food and died in large numbers.

The Peruvian fishermen noticed that warmer water and tropical fish had appeared. The skies were cloudy and the air was humid instead of dry. This had happened before, every few years. Because it was a bit like the weather that would happen around Christmas, at the start of Southern Hemisphere summer, they called it El Niño, the child, in honor of Christmas.

Today we know that El Niño is the warm phase of a climate phenomenon called ENSO (El Niño Southern Oscillation). El Niño doesn’t just make fish scarce off the coast of Peru, it has an impact on the entire planet.

About the Little Fish

Before they wind up on a pizza* or in a tin can with a rollaway lid, anchovies are in the ocean.

Living in the cool, nutrient-rich water of the Pacific off the west coast of South America, Peruvian anchovies are small and gray with scales that shimmer. Like all fish, anchovies hatch from eggs. The yolks provide the young fish with some nutrition, but not much. When the fish are young they must find food quickly to survive.

They eat mostly phytoplankton — algae that float in the water and, like plants, get energy from the Sun. Sometimes they eat zooplankton (small animals that float in the ocean), fish eggs, and larval fish. Over a couple of years they grow to be as long as a pen and can weigh up to 55 grams (2 oz).

While anchovies are small, large-scale processes of the planet influence them. Like all living things, they need certain environmental conditions to survive.

* Most of the fish caught are used for farm animal feed, not pizza.

(Image: Contributions to the fauna of Chile, by Charles Girard, 1857)

The Best Place to be an Anchovy

If you are an anchovy, the cold and nutrient rich water off the coast of Peru is an ideal place to live. This is where water from the deep sea makes its way to the surface – a process called upwelling.

Along the west coast of South America upwelling happens as winds blow north along the coast. The water at the ocean surface moves with the wind in a current and away from the coast, causing upwelling of the deeper water to the surface.

As surface water is pushed offshore, water from deep below is able to come up towards the surface. This deep water is rich in nutrients. As it rises up from the deep and into the part of the ocean where sunlight can reach through, the nutrients allow plant-like phytoplankton to grow and multiply. The phytoplankton is food for zooplankton and other animals, including anchovies.

But every few years the pattern of winds changes along the coast, which causes less water to move up from the deep. 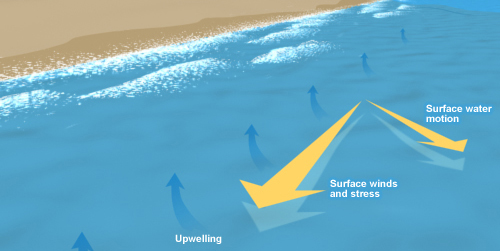 El Niño is not just about the ocean. It is a climate fluctuation, part of ENSO. There is evidence that El Niño occurred hundreds and even thousands of years ago. The fluctuations happen every 3-7 years and have global effects of the ocean and atmosphere – from the amount of rain that falls in Indonesia and California to the health of coral reefs in Australia. More warm water causes more evaporation, which leads to more rain in some locations.

The cycles happen as an area of high atmospheric pressure over the Pacific and low pressure over the Indian Ocean change in intensity. During El Niño, the high pressure weakens and winds slacken. With less wind, there is less upwelling. Less upwelling causes less cold water and more warm water at the surface of the tropical Pacific.

Changes in the way air moves around the atmosphere can affect weather patterns worldwide. Southern Alaska, for example, can become warmer than usual during an El Niño event. And the U.S. Gulf Coast can be cooler and more rainy than usual. El Niño even has an impact in Antarctica.

Not Enough Fish in the Sea

In the 1960s and early 1970s Peru was the biggest fishing nation in the world. In 1970, Peruvian fishermen caught nearly 10 million metric tons of anchovies. In 1971 they caught even more. Then, in 1972, there were no anchovies to be found.

While the number of Peruvian anchovies had been extraordinary, the fishermen had taken so many out of the sea that the remaining fish were less able to cope with a change in conditions like El Niño, which was causing the ocean water to warm in 1972. El Niño’s warmer waters meant less food for the anchovies, so young anchovies were not able to find enough food and survive.

El Nino kicked the anchovies when they were already down.

Resiliency is the ability to survive a disaster and recover. Overfishing in the 1960s had decreased the resiliency of the anchovies. When El Niño hit in 1972, the fish were less able to survive. Since then, the number of anchovies has increased slowly, but there still are not as many of them as there used to be.

Today Peru’s government has taken steps to help ensure that the numbers of anchovies remains stable. Annually, fishermen are only allowed to harvest 734,000 tons of anchovies - a small fraction of what fishermen used to harvest in the 1960s. Hopefully this will make the anchovies more resilient to the periodic El Niño events.