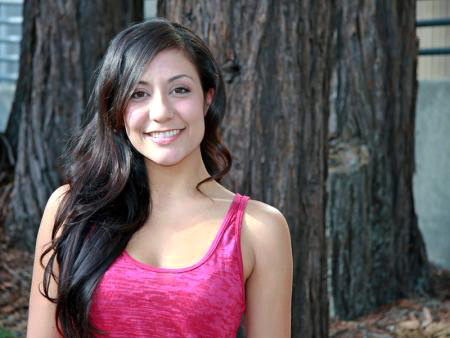 Dione Lee "Dee" Rossiter is a Ph.D. student working with thesis adviser Patrick Chuang in the Cloud and Aerosol Laboratory within the Earth and Planetary Science Department, University of California, Santa Cruz.

Ph.D. student Dee Rossiter studies low-lying stratocumulus clouds over the subtropical ocean—the area just north and south of the tropics. These clouds form near continents where cold upwelling water reaches the ocean surface; on average, they cover about a third of the world’s oceans. She's interested in the invisible physical changes, or microphysics, taking place in the clouds. Right now, she's focusing on drizzle and how it affects the water and energy budgets of the boundary layer and may even lead to dissipation of the cloud cover.

While earning a B.A. in atmospheric science from UC Berkeley, Dee participated in UCAR's SOARS internship program before graduating in 2004. She spent the next two years as a science teacher at the Lawrence Hall of Science in Berkeley before deciding to pursue her doctorate at UC Santa Cruz.

Why does what you do matter?

If you look at a picture of the earth from space you’re going to mostly see clouds, right? A good number of those will be marine stratocumulus clouds. They’re important to global climate because they’re good at reflecting incoming solar radiation that would otherwise warm the Earth. It’s really hard right now to accurately model these clouds, and one of the main reasons people do these microphysical measurements is to improve climate models.

What was your first scientific "experiment?"

I’m not one of these people who always wanted to be a scientist. I was good at math, but I thought it was boring and I couldn’t see a future in it.I didn’t start loving science till I was a junior in high school and I had to take physics. It ruled my world. I’ve always been an environmentalist at heart, and in SOARS [one of UCAR's student internship programs], I started seeing the connection between all that chemistry and all that physics and real-life problems. That’s one reason I switched to atmospheric science.

What do you hope to do after your Ph.D.?

I’ve never seen myself working as a fulltime researcher. I want to do outreach, science writing, science radio, anything where I could share my science knowledge with the general public. If I could influence people the way that all my mentors, advisors, counselors, and teachers have done for me, I would be a very rich person.

I really love field projects. I’ve been on four since starting grad school, including one in Chile, called VOCALS. It’s a time to get out of the lab and feel like I’m a part of the larger science community. You meet new people from all over the place—people who may be possible employers. Also, I like getting my hands on an instrument, not just working on code.

What do you like least or wish was different?

To go to grad school, you’re putting your life on hold for a good five or ten years, and that’s really hard. I want to have a career and have a family, but I’ve had to put the relationship thing on the side. Also, there are hardly any women. As much as I like hanging out with men, I want to share my experiences, ideas, and opinions with women too.

Why do you think there are so few women in physics?

Physics classes can be intimidating. If most women are like me, then it’s about being afraid of looking stupid or failing; I definitely have imposter syndrome. It’s not a very warm environment either. I loved Berkeley, but it was dog eat dog. There was little teamwork in most of my classes, and that’s a sad thing. The problem perpetuates itself, because if you’re the only woman in a physics class or on a field project, you don’t want to be there.

How do you kick back and let off steam?

I’m a vegan, and everybody says vegan food’s gross, so I make delicious vegan desserts to show that it can be done. Also, I started training in Tae Kwon Do since I started grad school, and it’s become a huge thing in my life. I try to apply its concepts in my schoolwork. One is just the idea of relaxing. Another is balance. When I was an undergraduate I stressed myself out like crazy; I never left the library, I didn’t sleep enough, and I ate poorly. My mental body was growing but my physical and emotional bodies were dying. I’ve become a more balanced person because of Tae Kwon Do.

What was the greatest obstacle to getting where you are now?

Getting over my fears and believing in myself. So many women, I think more than 75%, don’t move on to graduate school in science or engineering, and from underrepresented groups it’s even more. I think a lot of them are scared just like I was.

What parts of your personality help you in your professional life?

I’m an extremely hard worker. Then, being able to think outside the box helps. In science classes you learn about problems that people solved a hundred years ago, but being a researcher you think about things that there are no answers for.

Nobody wants their students to be unsuccessful; everyone wants to help you. Get the help! Bug your advisors, go to your teacher’s office hours, get involved, do the research. It’ll make your life easier and it’ll make you a more competitive grad-school applicant.