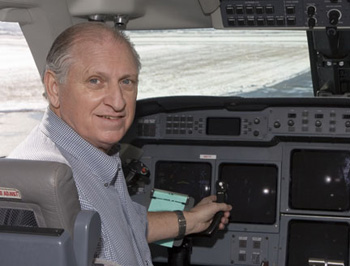 Henry Boynton can tell you what the atmosphere looks like at 51,000 feet above Earth's surface, a good 15,000 feet higher than most commercial airplanes venture. "The biggest thing you notice is that the sky is a lot bluer," he observes.

Cruising to that altitude is just part of a day's work for Henry, NCAR's chief pilot. He and the three other pilots on his team—Lowell Genzlinger, Robert Maxson, and Ed Ringleman—fly NCAR's research aircraft. The fleet includes a Gulfstream V jet modified for research and designed to fly at the cutting-edge of scientific research; and the C-130, a four-engine turboprop built for military transport and adapted for a variety of research missions. Both planes are owned by the National Science Foundation and operated by NCAR.

Research pilots fly planes loaded with instruments while scientists and technicians aboard take measurements, gather air samples, and run experiments. Although many such flights are routine from a pilot's perspective, sometimes the job requires navigating unusual flight paths, passing very close to storms, or flying at elevations as low as 100 feet above the ocean.

"We do things nobody else does," Henry says. "When everyone else goes around clouds, we go through them."

Henry has been flying since 1972. He was first exposed to aviation as a career while in the U.S. Navy, where he served as a mechanic and flight engineer on a P-3 Orion aircraft that hunted submarines. "When I got out of the Navy, I knew I wanted to fly," he says. After using the GI Bill to fund flying lessons and get his pilot's license, he got a job as a pilot at Brunswick Naval Air Station in Maine.

In the late 1970s, Henry responded to an ad for a contract pilot to fly in India for three months as part of an NCAR field project to study the summer monsoon. During the project, he flew with Gil Summers, NCAR's chief pilot at the time, who told him he'd be an ideal candidate for future pilot positions at NCAR. "I never really expected to hear from him," Henry recalls.

But in 1985, Gil called and offered Henry a job flying the Electra, a four-engine turboprop that NCAR had acquired in 1974. Henry relocated from Maine to Colorado, where NCAR is based, and his career as a research pilot took off. Over the past two decades, he's piloted six different planes for NCAR's Research Aviation Facility, including the two in the organization's current fleet.

He's also seen the world in the process. "I've been to a lot of nice places," he says, including Australia, Europe, Asia, and South America. "The only place I probably haven't flown is over the South Pole."

Henry simply loves to fly. "It's a thrill every time. I enjoy doing it and like to come to work," he says. He also appreciates that, as a research pilot, he's not stuck in a routine like many commercial pilots. "We don't do the same thing every flight," he says. "Every day and every project is different." Even during flights, nothing is predictable since researchers often decide to change flight paths spontaneously as conditions change.

Before NCAR acquired the Gulfstream V in April 2005, the Electra aircraft was Henry's favorite plane, since he had logged around 6,000-7,000 hours in its cockpit. "You get used to one airplane and you know it really well," he says.

Now that it's here, he and the other pilots are most eager to fly the new jet. Given the code name HIAPER, which stands for High-performance Instrumented Airborne Platform for Environmental Research, the G-V is designed to serve on the frontiers of atmospheric science for the next several decades. A corporate-sized jet converted into a research vessel, the aircraft has an exceptional combination of altitude, range, and payload. With a maximum altitude of 51,000 feet, it can skirt the lower stratosphere. A range of 6,000 miles lets it reach remote regions over the ocean and track atmospheric chemicals as they move around the globe before refueling. It can also meet the demands of complex projects by carrying up to 5,600 pounds of research instruments.

Henry and the other pilots have been testing the G-V's capabilities in advance of deploying it for field projects. He says the plane is surprisingly easy to fly for such a sophisticated aircraft. "It's easier to fly HIAPER than the C-130 because HIAPER has about 52 computers on it that will do just about everything for you, whereas on the C-130 you have to do everything yourself," he says.

Research pilots need a high level of skill and experience to fly in storms and other unusual conditions. Not surprisingly, safety is an enormous part of Henry's job. As he puts it, "Safety is the biggest concern if you want as many landings as you have take-offs."

Henry is looking forward to flying the G-V during the plane's first full-fledged field project, T-REX. Set in California's Sierra Nevada range in March, the project focuses on the effect of mountainous terrain on atmospheric currents. After T-REX, he heads to Mexico City to chase urban air pollution with the C-130 during MIRAGE. "It really is a lot of fun," he says about his job. "I couldn't ask for anything better."

Henry and his colleagues have piloted the G-V on many missions since this profile was published in 2006. It's easy to keep up with their exploits via NCAR's Earth Observing Laboratory. Follow the G-V's real-time flight position in Google Earth & Flight Aware. Discover the science questions they're exploring now. Get ideas about science career options. Find ways to stay in touch via social media, and more. It's all on the EOL Field Projects website.