Finding meaning in the data 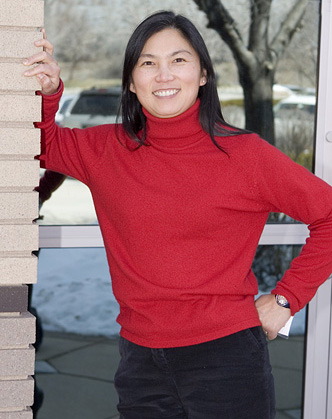 Jielun Sun likens data analysis to a form of meditation. "It's all about discovery," she explains. "Every time I look at data, I see something and feel like I learn things."

Jielun is an observational meteorologist at NCAR who studies the lowest part of the atmosphere, known as the planetary boundary layer. The air in this layer, which extends about a half mile above Earth's surface, is influenced by topography. Jielun looks at how different surface features such as forests, oceans, and mountains interact with the atmosphere within the boundary layer.

Most of her work involves scrutinizing measurements taken during field projects. On a typical day, she can be found at her computer using software to analyze data and visualize the results with plots, graphs, and other illustrations.

"I analyze data and try to figure out what I'm seeing," she says. "Do the data fit the picture I expected? Do I see any surprises in the data set?"

Jielun's observations and analyses of land-air interactions are critical to meteorologists who design computer models of weather and climate. "They can't calculate all the details in their models, so you have to give them a formula based on averages over regions and time periods," she explains.

Her raw data come from field projects that she helps plan and conduct with colleagues at NCAR and other institutions. The most recent expedition that she participated in, which took place along the Front Range of the Rocky Mountains in April 2004, investigated the transport of carbon dioxide over mountainous terrain. Researchers set up ground instruments in the mountains and flew over the peaks aboard the NSF/NCAR C-130, a research aircraft equipped with instruments and sensors. Their goal was to collect data on exchanges between forests and the atmosphere in order to determine how much carbon dioxide forests remove from the air over the mountains.

Data analysis by Jielun and her colleagues since then shows that carbon dioxide released from the ground is carried away by cold, downslope flows at night. Some of this air, which is rich in carbon dioxide, is carried back upslope the following morning and absorbed by forest vegetation. "It's important for us to understand these processes in order to estimate the global carbon budget over complex, varied terrain," Jielun explains. "This will help us quantify greenhouse gases for global climate change studies."

Although data analysis is her favorite part of the job, Jielun also enjoys fieldwork because it lets her interact with scientists, technicians, pilots, engineers, and more. Her work is often very collaborative, since meteorological concepts alone aren't sufficient to explain the boundary layer. "It's very interdisciplinary. You need to understand ecology and oceanography and collaborate with scientists in those areas," she says.

Jielun got the first inkling of her career path when she was a teenager growing up in Beijing. She knew she loved math and physics, but wasn't sure what to study as she prepared to apply to her city's university.

The daughter of two engineers, she got an earful of career advice. Her father, a professor, steered her away from mechanical engineering out of concern that it wasn't appropriate for a young woman to get dirty. "Do something theoretical," he recommended.

Jielun listed aerospace engineering, her mother's field, as her first choice on her application to Beijing University. She ranked meteorology as her second choice, at the suggestion of several of her mother's friends who worked at the Chinese weather bureau. They assured her that she'd get to use plenty of math and physics.

She got her second choice and soon discovered that her mother's friends were right. Meteorology was a perfect fit, particularly because she liked studying an applied science.

After completing her bachelor's degree, she earned a doctorate in meteorology at Yale University. Following a postdoctoral appointment at Oregon State University, she came to Boulder.

"I decided to move to Boulder because it's the best city in which to work on meteorology," Jielun says, referring to Boulder's reputation as a hub for research on meteorology and climate. After an initial stint as a member of the research faculty at the University of Colorado, she joined NCAR as a visiting scientist and later became a permanent part of the organization's scientific staff.

In addition to her role as a scientist in the NCAR Earth System Lab, Jielun co-chairs the organization's English as a Second Language Group, which aims to help non-native speakers on staff with their language skills. "As an ESL person, I always feel like no matter how long I stay in this country, I can never be sure that what I write is correct," she says.

Jielun would like to motivate more young scientists to consider observational fields. "Everyone is pushed into modeling these days," she says. "But you need observational data to validate numerical models. You need to be sure that your physics reflect reality, and reality comes from field experiments."