What influenced you to pursue a career in science?

I grew up in Christchurch, New Zealand. Through high school I did very well at mathematics, both pure and applied mathematics. In the last year, I took a national New Zealand examination and did well enough to skip the first year of university and entered a math honours program leading to an undergraduate degree of B. Sc. Hons (First Class) (equivalent to a Masters degree; in 3 years). This included courses on mechanics, fluid dynamics, relativity, and quantum mechanics. Originally I had planned on taking an engineering degree. So there I was, in New Zealand, looking for employment and the options weren’t great. One option was seismology and another was meteorology, and with the fluid dynamics background, I opted for the latter and joined the New Zealand Meteorological Service as a trainee forecaster. I had no knowledge of or particular affinity for weather. I became a junior forecaster for a while on shift work, but after 2 years I won a national fellowship with the government that allowed me to pursue a doctorate overseas, and I attended MIT and came away with a doctorate in meteorology. I then had to return to New Zealand to work one year for the government for every year I was away (3.3 years). So it was more or less an accident rather than design or motivation on my part that I ended up in this area of science.

Who are you at work and what does a typical workday look like?

I am a senior scientist in the climate analysis section. My job is changing. I have been extensively involved in national and especially international science. The latter through the Intergovernmental Panel on Climate Change, the Global Climate Observing System (GCOS), and the World Climate Research Programme. I have served on many projects, but most recently I chaired the Global Energy and Water Exchanges (GEWEX) project for 4 years leading up to a major international conference we ran in The Hague, the Netherlands, in July 2014. Accordingly, I have traveled extensively to attend meetings of the GEWEX panels, other WCRP project meetings, to represent the WCRP in various ways, and IPCC and other meetings. It was very demanding; I estimate I worked about 65 hours per week for many years, and a lot of that was dealing with the external committees and reports. However, I also have a research agenda, although that has largely been accomplished by having grants that enable me to hire someone to do the work I needed done. As a result I have not done much programming of computers myself in recent years, other than for quite simple things.

I stepped down from GEWEX at the end of 2014, and the AR5 (Fifth Assessment Report) from the IPCC is my last substantial involvement there, and hence I am in transition to trying to work a more normal 40-hour week and travel a lot less. Over the years, I have always answered queries from the media, and this accelerated when I was caught up in controversy (not of my making) called “climategate” in 2009 involving hacked emails that included many of mine. So I spend at least an hour each day dealing with media enquiries and trying to keep up with issues related to climate. I also give many public talks and lectures, participate in radio and TV interviews, and so forth. So these vary a lot from day to day, but there are always a number of inquiries every week.

I believe that a good illustration is very powerful and I have spent a lot of time on the figures in all of my papers (I use Adobe Illustrator extensively) and in the hundreds of PowerPoint presentations I have developed. Fortunately a lot of these can be done on a plane or from home on my laptop. Over the years I have also mentored various people (including the current NCAR Director, Jim Hurrell), and so this, too, can occupy part of a day.

Who are you outside of work?

I work out regularly, every two days, as a member of the Colorado Athletic Club. I used to run the Boulder Bolder and play squash, but nowadays the main sport I play is golf. I am a husband, father, and grandfather, although our two daughters have grown up and moved away from home. We have two dogs. I am a bit of a handyman and I often fix things for the various thrift shops my wife volunteers at (currently Greenwood Wildlife). So in summer, I mow lawns and work around the garden as well. I wish the grandkids were closer….

What has been your favorite work-related experience?

My work on how storms are affected by climate change caught the attention of Al Gore, the former Vice President, and I spent hours on the phone with him. So I was delighted when I was invited to participate in a grand cruise to Antarctica with Al Gore and many others in the Climate Reality Project in January 2012 on the National Geographic Explorer. A presentation of that wonderful 10-day trip is available on my web site: Destination Antarctica: 2012." This is a low resolution PDF version of the original Powerpoint presentation describing my inspirational voyage 28 January - 6 February 2012.

The Power of One: If you could thank only one person for academic or career support, who would it be?

That would be John Hickman, who was my supervisor at the New Zealand Meteorological Service when I joined in 1966, and he went on to become Director. 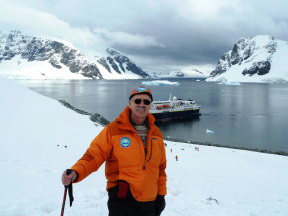 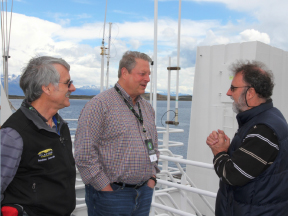 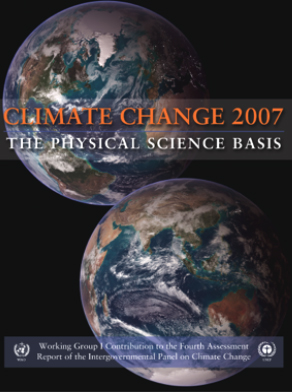 Trenberth in Antarctica in 2012 (left), with Al Gore and colleagues on the trip (center), and the 2007 IPPC Physical Science Basis Report (right).

Assess what you are good at and love to do, and find ways to exploit it. Nowadays most breakthroughs seem to be through combinations of skills from different areas, and so do not hesitate to broaden your skills and interact with others. Never stop learning.