Anatomy of a Storm’s Clouds

Students analyze cloud data from a storm that crossed the United States in late November 2019. They identify cloud types from photos of the sky in various locations to identify the zonation of clouds across a cold and warm front.

Print the student pages and cloud charts and download the Field Guide to Clouds app on mobile devices.

A mid-latitude cyclone is a typical storm that occurs in the mid-latitudes, about 30-60 degrees north and south of the equator. It has cyclonic rotation (counterclockwise in the Northern Hemisphere and clockwise in the Southern Hemisphere) around an area of low pressure. The rotation brings cold and dry air masses, which are common at higher latitudes, in contact with warm and moist air masses, which are common at lower latitudes. When these air masses collide, weather fronts form. Several different types of weather fronts are associated with mid-latitude cyclones.

A cold front forms when a cold air mass pushes into a warmer air mass. Cold fronts can produce dramatic changes in the weather. In the Northern Hemisphere, cold fronts often are positioned on the south side of low-pressure systems where colder air from the west is advancing eastward. As a cold front moves into an area, the heavier (more dense) cold air behind the front pushes into the lighter (less dense) warm air ahead of the front, causing it to rise up into the troposphere. Lifted warm air ahead of the front often produces thunderstorms and/or short periods of intense rainfall. On weather maps, a cold front is represented by filled-in triangles along a solid blue line. The triangles are like arrowheads pointing in the direction that the front is moving.

A warm front forms when a warm air mass pushes into a cooler air mass. The warm air mass slides above the cool air mass, forming clouds and precipitation. In the Northern Hemisphere, warm fronts often form on the east side of low-pressure systems where warmer air from the south is pushed north. High clouds (like cirrus and cirrostratus) and middle clouds (like altostratus) can be seen far ahead of a warm front. As the front gets closer, the clouds become lower, and a long period of steady or light rain is likely until the front passes. On weather maps, a warm front is represented by filled-in semicircles along a solid red line. The semicircles indicate the direction that the front is moving. 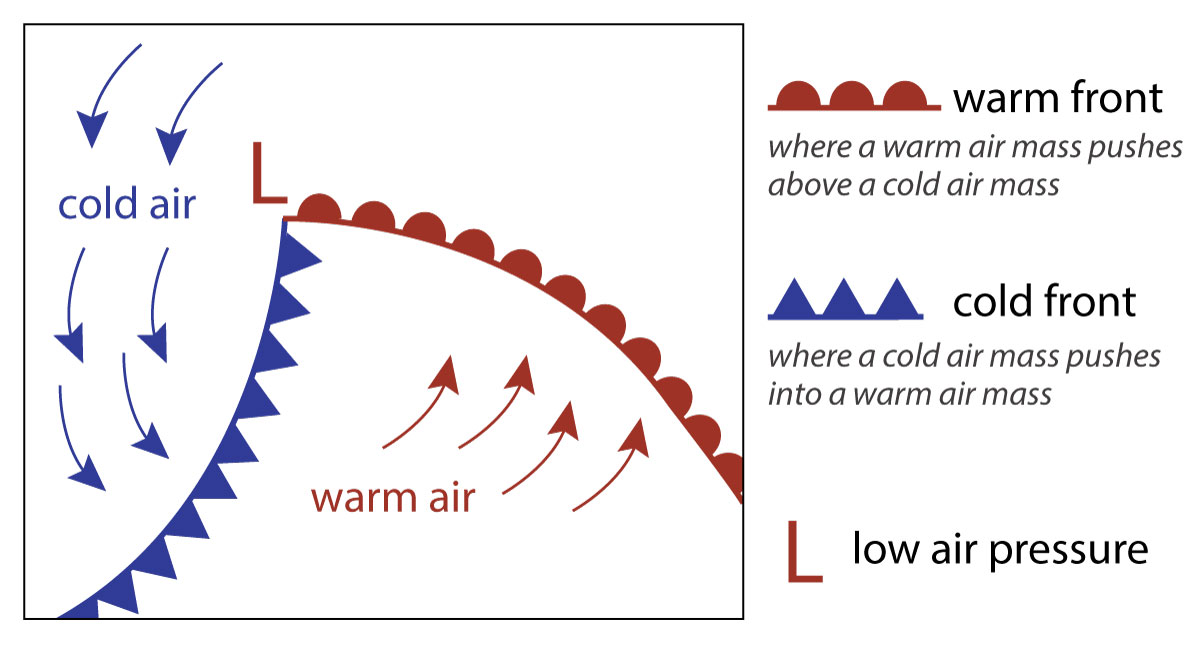 Weather map showing the location of cold and warm fronts and direction of air movement around an area of low pressure
Credit: UCAR/L.S. Gardiner

Warm fronts produce clouds when a warm air mass slides above a cold air mass. In the photographs, students will see examples of stratiform clouds - stratus, nimbostratus, altostratus - as well as cirrus and possibly cirrostratus. In a typical wintertime warm front, high clouds (cirrus, cirrostratus) occur far ahead of the front, followed by middle clouds (altocumulus, altostratus), then by low clouds (stratus, nimbostratus) near the front. After the front passes, stratocumulus clouds can occur in the warm air mass. In the summertime, thunderstorms (cumulonimbus clouds) can also occur with warm fronts, if the rising warm air is unstable enough.

In comparison, cold fronts - where heavy, cold air pushes lighter warm air upward - are more commonly associated with cumuliform clouds (such as cumulus and cumulonimbus clouds). After the front passes, the cold air mass will be characterized by stratocumulus clouds or clear skies. Some cold fronts, particularly those that move westward from the Atlantic Ocean (which are called “back door” cold fronts because they move in the opposite direction from most cold fronts), can produce nimbostratus and stratus clouds.

This activity was developed by Lisa S. Gardiner of the UCAR Center for Science Education and Kevin Grise of the University of Virginia as a part of the Clouds, Weather, and Climate Teaching Box.