Students align "tree ring cores" of different ages to build up a long timeline of past climate data.

Cut apart a set of four simulated tree ring cores for each student group. Print on cardstock if you want to make sturdier cores. For a more realistic experience, you can slide the paper strips into clear plastic straws to make the cores look more authentic.

The table below shows the all of the data students will eventually fill into their table, which is initially blank. The first step is to fill in the second column with the ages of each of the trees.

The diagram below shows the appearance of the four simulated core samples when they are properly aligned (click to enlarge).

Trees contain some of nature's most accurate evidence of the past. Their growth layers, appearing as rings in the cross section of the tree trunk, record evidence of floods, droughts, insect attacks, lightning strikes, and even earthquakes.

In this activity, students discover how scientists "decode" tree rings to learn about the past. Scientists combine records of tree ring patterns from many trees to create longer chronologies of climate history.

Each year, a tree grows. Trees grow taller over the years, but their trunks also grow "fatter" or bigger around each year. The new growth that makes the trunk larger is called a tree ring.

Each tree ring has two parts. In the spring and early summer each year, trees normally grow quickly, creating light-colored wood in a wide ring. This wide, light part of the ring is called "early wood." In the late summer and fall, trees normally grow more slowly, producing dark-colored wood in a narrow ring. The dark, narrow part of the ring is called "late wood". A full year's growth includes both a light, early wood ring and a dark, late wood ring. 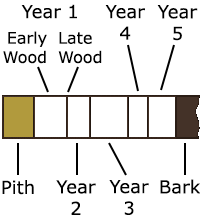 The pith is a special type of plant tissue found at the center of tree trunks. Scientists don't count the pith when counting tree rings. In the simulated tree ring cores used in this activity, each annual ring has a wide, white area that represents early wood, followed by a thin, black line that represents late wood. Finally, the last ring in each core is followed by bark. Students shouldn't count the bark when counting tree rings. This example (left) shows what a simulated tree ring core, including the pith and the bark, for a tree that lived for five years would look like.

Some years a tree grows more than it does in other years. If a year is very dry, the tree hardly grows at all. If there is plenty of water in a different year, the tree will grow more than in a dry year. Other factors, like the temperature, can also affect how much the tree grows. If you count the number of rings of a tree, you can accurately tell the age of the tree. If you measure the width or thickness of the tree rings for each year, you can tell whether each growing season for trees in that region was good or poor.

Scientist can use tree ring patterns to learn about past droughts and other aspects of climate. If a region is suffering from drought and is very dry for several years, the trees in that region will grow slowly and have very narrow rings. The science of studying tree rings to see what they tell us about past climates is called dendrochronology.

Scientists who study tree rings, dendrochronologists, almost never cut down trees to analyze their rings. Instead, they use a tool called a borer to extract a long, thin sample - similar in size to a pencil or a straw - from a living tree without harming the tree. Scientists screw the borer into the tree and pull out a sample of wood that is about 4 millimeters (less than a quarter-inch) in diameter, then seal the hole to prevent disease.

Dendrochronologists combine the data from different trees to create a longer history than they could make from any single tree. For example, imagine two trees that each lived for 100 years in the same location. If tree A started growing in 1830 and died in 1930, and tree B started growing in 1910 and died in 2010, we could combine their tree ring data to build a history of climate from 1830 to 2010. This would allow us to create a history of climate spanning 180 years, far longer than the record from a single 100-year-old tree.

In this activity, students align simulated tree ring core samples to build up a longer climate chronology for the area around the fictional village of Pinetown.

Most actual tree ring studies are done in either cold or dry regions where trees are barely able to survive and grow very slowly. In places where trees grow slowly because of cold temperatures, such as sub-polar latitudes and in mountains just below the tree line, different growth rates are most strongly associated with slight changes in temperature. In such locations, tree growth rings that form during warm years are much wider than the usual rings formed in typically cool years. Variations in moisture levels are not as important of a factor in tree growth rates in cool climates, so the tree ring records primarily record temperature data in those places. On the other hand, trees that grow in arid regions are more strongly influenced in their growth rates by slight changes in precipitation from year to year, while changes in temperature would have a lesser impact on the variations in tree ring widths. By looking at tree ring patterns in different environments, scientists can learn about both temperature and precipitation patterns in the past somewhat independently.

In practice, dendrochronologists combine patterns from many trees in a region and average those together to estimate the climate history in that region. Two trees that grow within a few meters of each other could still experience substantially different microclimates, influencing their growth rates and, thus, ring patterns. One tree might be shaded by other nearby trees, or be in a slight depression that collects water when it rains. The soil might be richer or poorer in one area. Scientists collect data from many trees in a region to average out these microclimate-induced fluctuations.

As modeled in this activity, scientists also combine records from trees that lived at different times to build up longer climate chronologies. As long as the trees have some overlap in their lifespans, it may be possible to match up their ring patterns to produce an extended history. Especially in arid regions, it may take a VERY long time for the trunk of a dead tree to decompose. In some cases, dendrochronologists can extract samples from trees that have been dead for centuries, which they then align with patterns from old, but still living, trees. Wood can also be preserved in human construction and crafts, and samples from various wooden objects have been used to extend tree ring chronologies. Examples include beams from old buildings and wood from log cabins, planks and beams from old wooden ships, and even samples of wood from old wooden instruments such as violins. In some places, forests have been flooded when new lakes formed, or trees fell over into peat bogs, preserving the wood for many generations. Some climate chronologies created by combining tree ring records span many centuries of time.

This activity was a part of Project LEARN at UCAR, was modified with permission from Global Change: Time and Cycles (U.S. Geological Survey), and was revised in 2018 by Randy Russell.