Students will investigate how different surfaces of the Earth reflect and absorb heat and apply this knowledge to real-world situations.

For a class demonstration or for each team of students:

Have students design and conduct their own research into the influence of surfaces on temperature comparing Earth surfaces that interest them (such as colored soils, dry and wet soils, grass, dry leaves, or different types of coverings such as plastic or aluminum foil). Have students compare the data with these new surfaces compared to the given surfaces (water, light soil, dark soil). Note that the data may not be comparable due to variations in experimental design, such as differences in light bulb temperature and height of the lamp.

Of the energy that reaches the Earth from the Sun, a small amount is absorbed by the atmosphere, a larger amount (about 30%) is reflected back to space by clouds and the Earth's surface, and most of it is absorbed at the planet surface and then released as heat.

Energy is transferred between the Earth's surface and the atmosphere in a variety of ways, including radiation, conduction, and convection. The graphic below uses a camp stove to summarize the various mechanisms of heat transfer. If you were standing next to the camp stove, you would be warmed by the radiation emitted by the gas flame. A portion of the radiant energy generated by the gas flame is absorbed by the frying pan and the pot of water. By the process of conduction, this energy is transferred through the pot and pan. If you reached for the metal handle of the frying pan without using a potholder, you would burn your fingers! As the temperature of the water at the bottom of the pot increases, this layer of water moves upward and is replaced by cool water descending from above. Thus convection currents that redistribute the newly acquired energy throughout the pot are established.

What do trees, snow, cars, horses, rocks, centipedes, oceans, the atmosphere, and you have in common? Each one is a source of radiation to some degree. Most of this radiation is invisible to humans but that does not make it any less real.

About 43% of the total radiant energy emitted from the Sun is in the visible parts of the spectrum. The bulk of the remainder lies in the near-infrared (49%) and ultraviolet section (7%). Less than 1% of solar radiation is emitted as x-rays, gamma waves, and radio waves.

A perfect radiating body emits energy in all possible wavelengths, but the wave energies are not emitted equally in all wavelengths; a spectrum will show a distinct maximum in energy at a particular wavelength depending upon the temperature of the radiating body. As the temperature increases, the maximum radiation occurs at shorter and shorter wavelengths. The hotter the radiating body, the shorter the wavelength of maximum radiation. For example, a very hot metal rod will emit visible radiation and produce a white glow. On cooling, it will emit more of its energy in longer wavelengths and will glow a reddish color. Eventually, no light will be given off, but if you place your hand near the rod, the infrared radiation will be detectable as heat.

The amount of energy absorbed by an object depends upon the following:

Think about being outside and how different materials reflect or absorb the incoming radiation. White-colored surfaces such white paint reflect most of the radiation and therefore the albedo value is around 1. Dark-colored surfaces such as gravel and asphalt absorb most of the radiation and have low albedo values closer to 0. This also explains why darker-colored surfaces have higher temperatures. For example, in summer black asphalt roads can be scorching hot. As cities grow, and asphalt, concrete, and dark roofs replace the vegetation, these urban surfaces absorb—rather than reflect—the Sun's heat, causing surface temperatures and urban air temperatures to rise. This is known as the urban heat island effect. 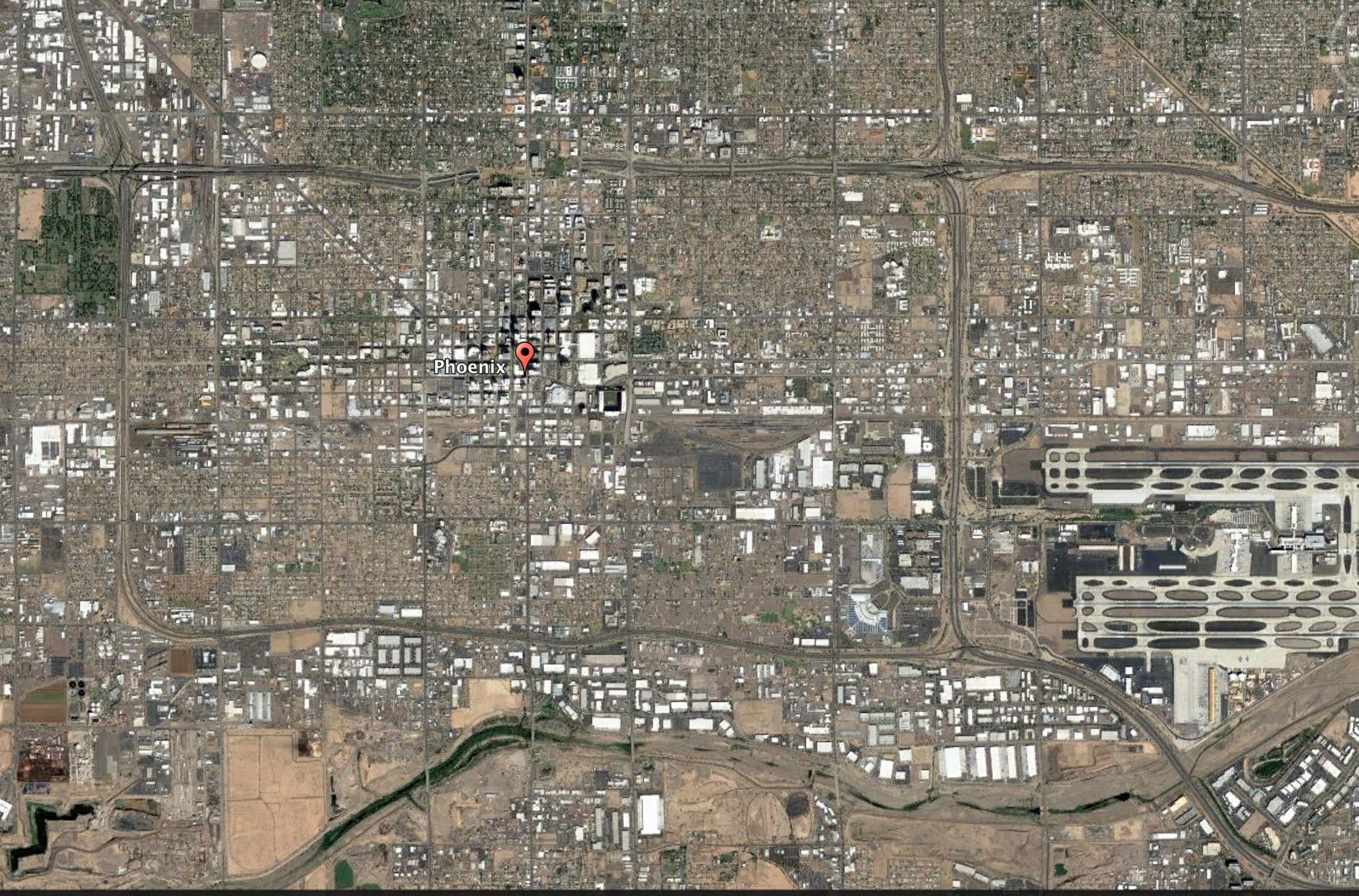 The city of Phoenix, Arizona, has made an effort to paint more roofs white to combat the urban heat island effect. The aerial view of Phoenix illustrates the different land surfaces such as water (river located at bottom of image), soil and rock (brown), vegetation (green), buildings with white roofs, roads, and an airport (lower right).
Credit: Google Earth

This activity was developed at UCAR as part of Project LEARN and includes graphics created by the COMET Program.