What do soda and the oceans have in common?

Students will use soda to explore how carbon dioxide is able to dissolve into liquid. They will learn about Henry's law, which describes how the solubility of gas into liquids is dependent on temperature, and develop hypotheses about how the amount of carbon dioxide in the atmosphere, a greenhouse gas, is affected by rising atmospheric and oceanic temperatures.

Assessment of student participation in this activity including hypothesis generation, data collection/observation, and discussion addresses understanding of science and engineering practices.

Answers to questions at the end of the student reading will assess understanding of Henry's law. (Answers: A=3; B=1; C=2; D=2; E= all)

(Note: Additional background science information and videos are included on the student section of this activity.)

In this activity, students explore how atmospheric carbon dioxide (CO2) gas gets into and out of the ocean. This is important because the ocean currently absorbs much of the carbon dioxide that we add to the atmosphere. This is not enough to mitigate all of the anthropogenic carbon dioxide, but it has reduced the amount currently in the atmosphere. However this uptake of CO2 by the oceans effects the pH level, which among other things causes coral bleaching. The amount of the gas that is able to be taken up by the ocean is regulated by Henry's law.

Within a carbon dioxide molecule (one oxygen atom and two carbon atoms), the atoms share electrons unevenly. This means that the oxygen side of the molecule has a slight negative charge, making it is a (weak) non-polar molecule.

Scientists are concerned that increased CO2 in the atmosphere could create a positive feedback loop, a cycle in which the effects of a change in a system increase the magnitude of the change. For example, if ocean temperatures warm, CO2 could be released from solution, increasing the atmospheric concentrations leading to further heat-trapping mechanisms, or at least slowing the rate of uptake by the oceans. The cycle continues to warm the atmosphere and the ocean. 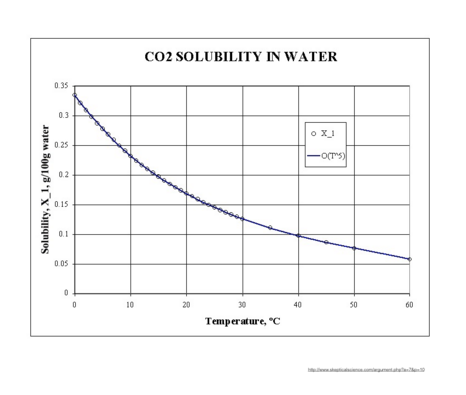 How does soda relate to Henry's law and carbon dioxide uptake by the ocean?
After learning about Henry's law, students should be prepared to develop a hypothesis about the state parameters of each of the three temperature sodas, hopefully recognizing that the warm soda will retain the least amount of fizz and that the cold bottle will retain the most fizz (and thus, the most CO2). Students should come to the conclusion that the warm soda has few bubbles because as Henry’s Law indicates, as temperature increases, solubility decreases, and conversely, as temperature decreases solubility increases.