Chemical Composition of the Atmosphere Diagram 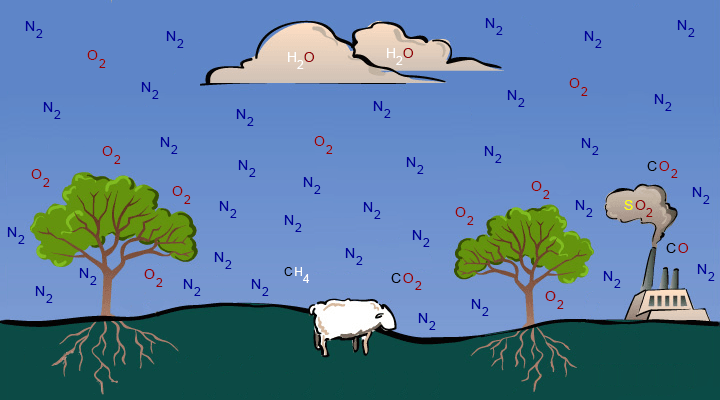 Earth's atmosphere contains many different chemical compounds in gaseous form. This simple diagram shows some of those chemicals and a few of their sources, including trees, animals, and human activities. Chemicals depicted in this picture include nitrogen (N2), oxygen (O2), carbon dioxide (CO2), methane (CH4), carbon monoxide (CO), and sulfur dioxide (SO2). Water (H2O) is also present in the atmosphere, as invisible, gaseous water vapor and in the form of visible, tiny droplets or ice crystals we know as clouds. The vast majority of the atmosphere is made up of nitrogen (78%) and oxygen (21%). The rest of the gases combined only account for about 1% of the atmosphere. Along with all of these different gases, the atmosphere also holds many tiny, floating particles and droplets of liquid that scientists collectively call aerosols. Dust, pollen grains, soot from fires, and salt from sea spray are a few of the types of aerosols.