The surface of the Earth is a patchwork of many colors. Some of the colors are dark, such as the blue of the ocean, brown soil, and green forests. Other colors are pale, such as yellow desert sands and white ice. 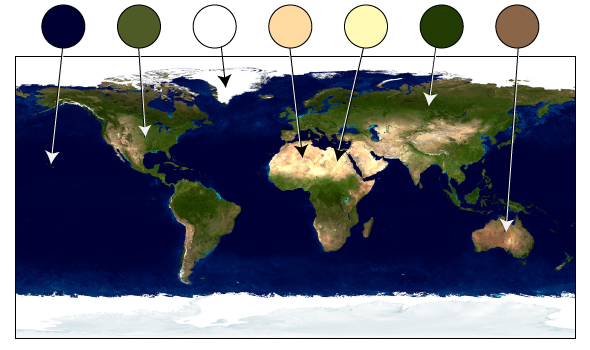 Why do we care what happens to sunlight that gets to Earth? Understanding how much energy from the Sun is reflected back out to space and how much is absorbed becoming heat is important for understanding climate.

If Earth's climate is colder and there is more snow and ice on the planet, albedo increases, more sunlight is reflected out to space, and the climate gets even cooler. But, when warming causes snow and ice to melt, darker colored surfaces are exposed, albedo decreases, less solar energy is reflected out to space, and the planet warms even more. This is known as the ice-albedo feedback.