In this activity, students will observe and measure the water given off through transpiration by a plant in a small terrarium.

For class demonstration or each team of 3-4 students:

(Note: The time it takes to see condensation depends on the strength of the sunlight or grow light, the transpiration rate of the plant, and how well the terrarium is sealed. Minimal condensation should occur within about 45-60 minutes but times can vary significantly based on source of sunlight, type of plant, and strength of the seal from the tape. More moisture will accumulate with time (See example below.)

Do the extension above but give each student group different sizes of leaves or a different kind of plant. Compare the water levels between groups. Students should notice that some plants have higher transpiration rates (use more water from cup).

As it moves through the water cycle, water changes its state. At different times the same water can be a liquid, a solid (ice), and a gas (water vapor). Water at the surface of the ocean, rivers, and lakes can become water vapor and move into the atmosphere with a little added energy from the Sun through a process called evaporation. 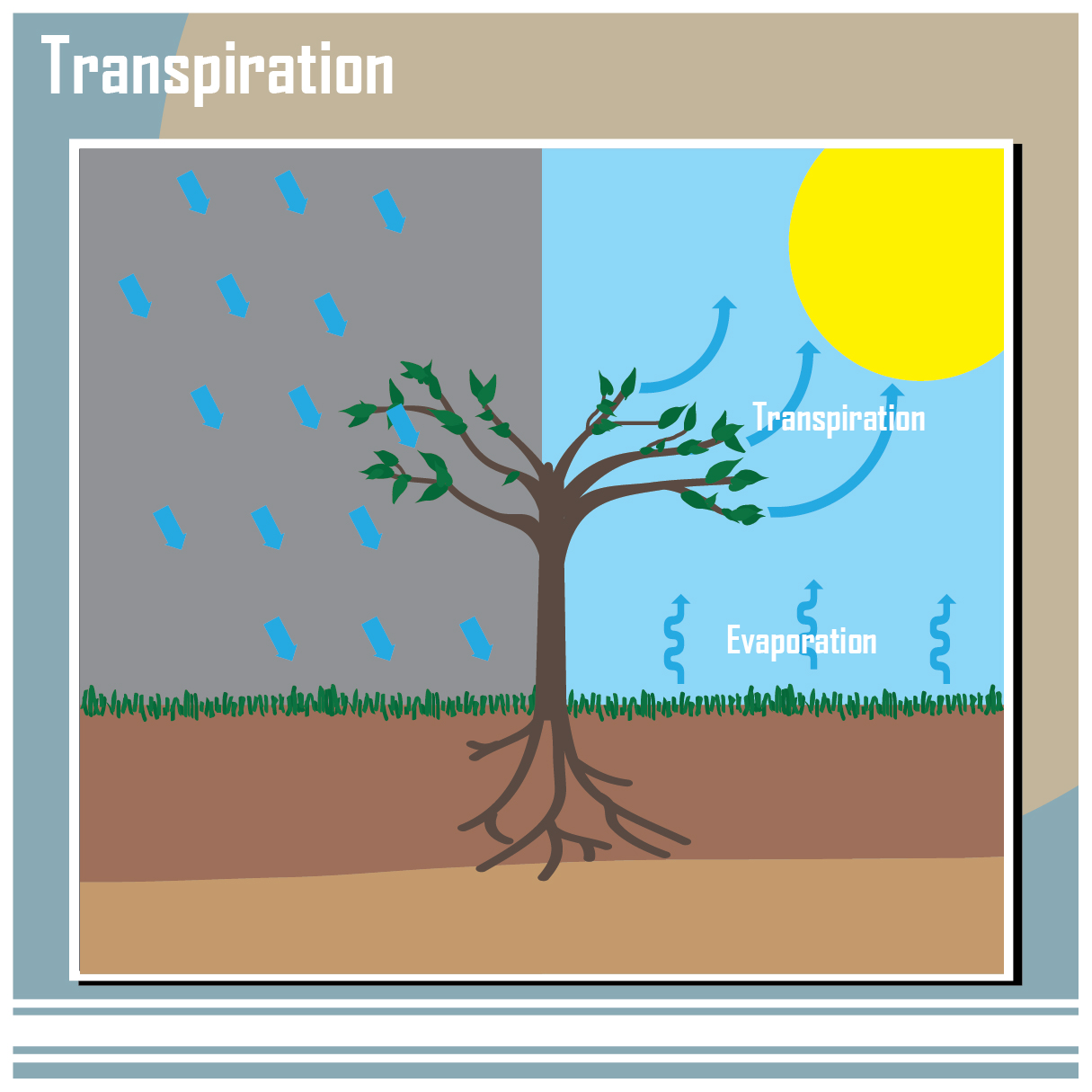 Plants absorb water primarily through their roots. They release the water as water vapor into the atmosphere through openings in their leaves in a process called transpiration.Collectively, the water evaporated from the land and from plants is called evapotranspiration.

Photosynthesis is a chemical reaction in which the energy from the Sun is used to create sugar (glucose) for plants to grow. For the process of photosynthesis to occur, plants "breathe in" carbon dioxide (CO2) from the Earth's atmosphere (which humans and other animals breathe out).

When the stomata (similar to the pores of our skin) on the leaf of the plant open, the plant can photosynthesize but the plant also loses water through transpiration. As with human respiration, trees tend to transpire more with increased temperatures, more intense sunlight, higher water supply, and size. However, when it gets too hot, transpiration will shut down.

Many factors influence transpiration rates, including leaf shape, size, pores (stomata), and waxiness of the leaf surfaces. Where a particular tree species grows often depends upon how it has adapted its transpiration rate to a particular climate. Conifer needles are more efficient at retaining moisture than broadleaf trees because they have stiff, waxy leaves (needles) with small stomata that are recessed in the leaf surface. Because they are efficient in retaining water, conifers are found in drier and colder climates where water supplies are limited.

Plants transpire vast quantities of water even though we cannot see it. Only one percent of all water a plant absorbs is used in photosynthesis; the rest is lost through transpiration. In one growing season, one corn plant transpires over 200 liters of water.

Carbon dioxide (CO2) is a major greenhouse gas. The level of CO2 in the atmosphere has been increasing as we do things like burn fossil fuels and decrease the amount of forests. Carbon dioxide is contributing to the increase of the global average temperature and it can also have an impact on plant transpiration.

If CO2 levels in the atmosphere are high, the stomata on the leaves of the plant do not have to open as much to obtain the CO2 they need for photosynthesis. With the stomata less open, a plant will not be able to release as much water vapor through transpiration. The water vapor cools the plant and the air around it, so, on a global scale, as carbon dioxide levels climb, transpiration rates drop, which can cause even more climate warming.

This activity was developed at UCAR as part of the Project LEARN and includes graphics created by the COMET Program.