All of the water on Earth makes up the hydrosphere. And that water doesn't stay still. It is always on the move. Rain falling today may have been water in a distant ocean days before. And the water you see in a river or stream may have been snow on a high mountaintop. Water is in the atmosphere, on the land, in the ocean, and underground. It moves from place to place through the water cycle.

There are about 1.4 billion km3 of water (336 million mi3 of water) on Earth. That includes liquid water in the ocean, lakes, and rivers. It includes frozen water in snow, ice, and glaciers, and water that’s underground in soils and rocks. It includes the water that’s in the atmosphere as clouds and vapor.

If you could put all that water together – like a gigantic water drop – it would be 1,500 kilometers (930 miles) across.

Of all the water in the hydrosphere, the vast majority, about 97% of it, fills the ocean.  About 2% of the water on Earth is frozen in ice sheets near the poles and in glaciers. Sometimes the ice on Earth is included in the hydrosphere and sometimes it's seperated into a special part of the Earth system called the cryosphere. Most of the ice is in Antarctica, a smaller amount in Greenland in the Arctic, and a tiny fraction in mountain glaciers around the world. Most of the remaining 1% of Earth’s water is underground, in shallow aquifers, as soil moisture, or deep underground in rock layers. Only a small fraction of the water on Earth (0.03%) is in lakes, wetlands, and rivers. 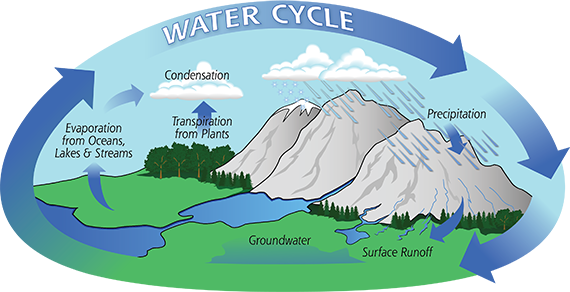 The main processes in the water cycle
Credit: NASA

Water's on the move.

As it moves through the water cycle, water often changes from a liquid, to a solid (ice), to a gas (water vapor). Water in oceans and lakes is typically liquid; but it is solid ice in glaciers, and often invisible water vapor in the atmosphere. Clouds are tiny droplets of liquid water or small ice crystals.

Because air is cooler at higher altitude in the troposphere, water vapor cools as it rises high in the atmosphere and transforms into water droplets by a process called condensation. The water droplets that form make up clouds. Water vapor can also condense into droplets near the ground, forming fog when the ground is cold. If the temperature is cold enough, ice crystals form instead of liquid water droplets.

If the droplets or ice crystals within clouds grow in size, they eventually become too heavy to stay in the air, falling to the ground as rain, snow, and other types of precipitation.

What happens to the rain and snow that fall?

Less water evaporates over the land than falls onto land as precipitation. Evaporation of water from the land happens directly from lakes, puddles, and other surface water. Also, water also makes its way into the atmosphere via a process called transpiration in which plants release water into the air from their leaves that was pulled up from the soil through roots. Collectively, the water evaporated from the land and from plants is called evapotranspiration.

Some of the snow and ice that falls as precipitation stays on the land as a part of icy mountaintop glaciers or the ice sheets that cover places like Greenland and Antarctica. Some of the precipitation seeps into the ground and joins the groundwater that is often tapped by wells to provide water to farms, towns, and cities. 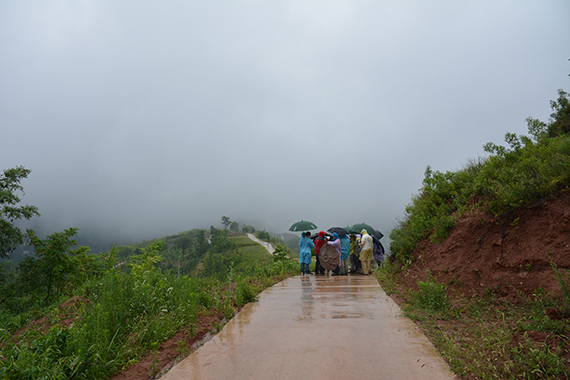 A rainy day in the countryside near Xi’an, China
Credit: L.S. Gardiner

How long does water stay in a place before it moves?

The length of time that particular water molecules stay in a part of the water cycle is quite variable, but water does stay in certain places longer than others.

A drop of water may spend over 3,000 years in the ocean before evaporating into the air, while a drop of water spends an average of just nine days in the atmosphere before falling back to Earth.

Water spends thousands to hundreds of thousands of years in the large ice sheets that cover Antarctica and Greenland. The oldest ice in Antarctica has been there for 2.7 million years. However, snow that falls in the winter may only stick around for a few days in mid-latitudes locations, where temperatures often rise above freezing causing the snow to melt, or up to six months closer to the Arctic, where temperatures stay below freezing all winter.

Water stays in soil for around one to two months although this varies greatly. Water that’s in soil moves into the atmosphere by evaporation and also by transpiration.

There are exceptions. For example, while water vapor spends relatively little time in the atmosphere, vapor that makes its way into the stratosphere, the layer of the atmosphere above the troposphere where weather typically forms, may remain there for a long time. Also, while water generally spends thousands of years in the ocean before moving on, water in warm, shallow coastal areas may evaporate and leave the ocean very quickly as compared with other areas of the ocean.

Soil moisture is typically higher at tropical latitudes than elsewhere. This three-day composite global map of surface soil moisture was made with data from the NASA SMAP radiometer instrument between Aug. 25-27, 2015. Moist soils are shown in blue. The most dry soils are shown in yellow and orange.
Credit: NASA

Warming global temperatures increases the rate of evaporation and precipitation. The impacts are expected to increase over this century as climate warms. Some areas may experience heavier than normal precipitation, and other areas may become prone to droughts. Other parts of the water cycle - such as clouds, the ocean, glaciers and sea ice - are also affected by climate change. 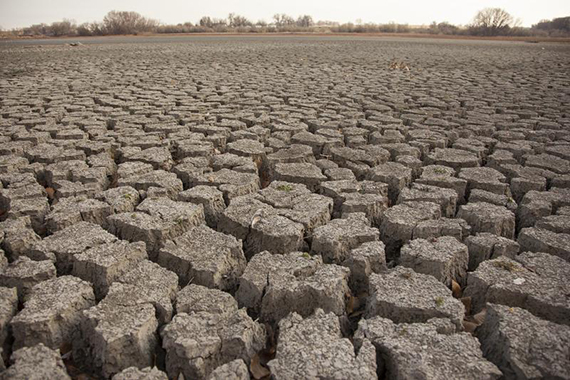 Mudcracks form during droughts when the ground dries out and moisture evaporates. As climate continues to change, some areas are becoming more drought prone.
Credit: NOAA