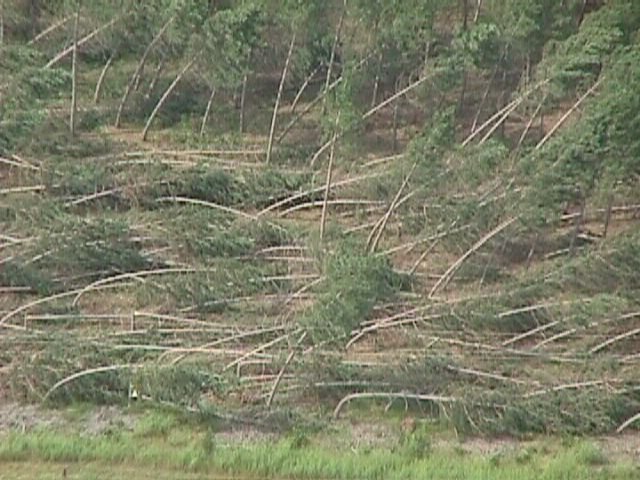 The strong winds of a microburst blew these trees down. Notice how they are all blown in the same direction.
Credit: NOAA

Air comes out because the pressure inside the balloon is higher than the pressure outside the balloon. Air molecules will spread out, spacing themselves far apart if they have the room. Air pressure isn’t exactly the same everywhere at the Earth’s surface because the Sun heats some places more than others. In the places where air is warmed most, it rises. This leaves a little less air near the Earth’s surface than in surrounding areas that didn’t get as warm. There is still air everywhere, but the air molecules are more widely spaced in some areas and more tightly packed in others. The places with more air molecules have higher pressure. The areas with fewer air molecules have lower pressure. Air whooshes into the area with lower pressure. That’s wind. So when you let the air out of a balloon, you are making a little bit of wind.

Sometimes wind is just a light breeze and other times it is strong enough to blow the roofs off buildings. To describe the strength of wind, weather reports often use words like Light Wind, Strong Wind, and Gale.  The Beaufort Scale assigns a number between zero and twelve to describe the strength of wind. Zero of the Beaufort Scale is complete calm. Twelve describes the powerful winds found in hurricanes. Winds are also described with the direction they blow. Easterly winds blow from the east, while westerly winds blow from the west.

There are steady winds that always blow in the same direction because of the pattern of how air moves through the atmosphere over the entire planet. For centuries sailors have depended on these predictable winds known as the Trade Winds, Westerlies, and Polar Easterlies. These winds turn to the right in the Northern Hemisphere and to the left in the Southern Hemisphere because of Earth’s spin, a phenomenon known as the Coriolis Effect.