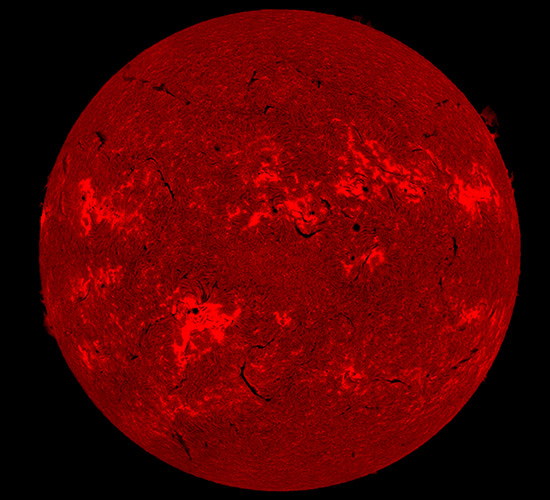 This photo of the Sun was taken on July 18, 2000. It was taken using a filter that only transmits a specific wavelength of red light. That color of red is called the hydrogen-alpha (or H-alpha) band. It is emitted by hydrogen atoms, the main constituent of the Sun. This picture was taken near the peak of the sunspot cycle (Solar Max) when the Sun was very magnetically active. Several solar filaments are visible in this image (dark lines or curves). Lighter-colored areas are magnetically disturbed "active regions". A few sunspots are visible as small, black dots. H-alpha images are particularly good at revealing certain features, especially filaments. H-alpha light has a wavelength of 656.28 nanometers (6,562.8 Ångstroms).