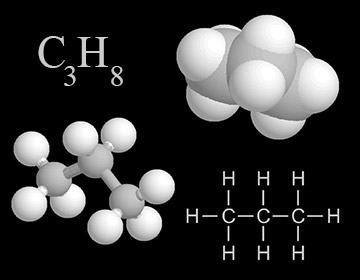 Propane is a common hydrocarbon. Shown here are four representations chemists use for propane. In the colored models, carbon is light gray and hydrogen is white.
UCAR

There is a large class of important chemical compounds whose molecules are made up entirely of carbon and hydrogen atoms. These compounds, as a group, are called "hydrocarbons".

Hydrocarbons are the critical energy storage molecules within all major types of fossil fuels (including coal, oil, and natural gas) and biofuels. They also form the feedstock for the production processes of many types of plastics.

Burning hydrocarbons in the presence of oxygen (O2) produces carbon dioxide (CO2) and water (H2O). If there is too much carbon or too little oxygen present when hydrocarbons are burned, carbon monoxide (CO) may also be emitted. Sometimes unburned hydrocarbons are released into the air during incomplete combustion.

Burning fossil fuels, including gasoline in automobile engines, releases some hydrocarbons into the air. In a typical urban environment, the atmospheric concentration of hydrocarbons is around 3 ppm (parts per million). Some hydrocarbons, along with other types of Volatile Organic Compounds (VOCs), contribute to the formation of photochemical smog.

The carbon atoms in hydrocarbons often form long chains or ring structures. Some of the hydrocarbons that you may have heard of include methane (CH4), butane (C4H10), propane (C3H8), benzene (C6H6), ethane (C2H6), and hexane (C6H14).