The History of Atmospheric Discovery 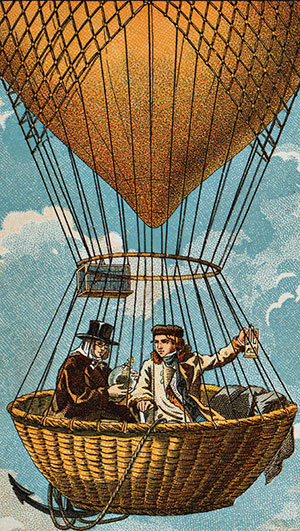 If you lived before the 20th Century, then you might have looked up at the sky every day, but you would have been unable to go there.

Exploring the atmosphere was a challenge before we developed the technologies that get us there like hot air balloons, weather balloons, parachutes, dirigibles, and, eventually, planes. The technology for taking measurements in the atmosphere has also improved over time.

Below tells the story of the lengths people went to in order to explore the atmosphere and the technologies they used to get high in the sky and make measurements. You'll learn about people who climbed mountains carrying enormous barometers and people who passed out from freezing temperatures and lack of oxygen as they took measurements of the air several miles high.

A Small Mountain and a Large Barometer

In 1648 two men hiked up the Puy de Dome, a small grass-covered extinct volcano in central France with a summit elevation of 1464 meters. They carried with them a meter-tall glass column filled with mercury. The tall column of mercury was sitting in a pool of mercury at the base.

The men were Blaise Pascal and Florin Perier. Their unusual contraction - the glass column of mercury - was the first barometer, a device for measuring air pressure. Today, a barometer can be carried in one hand. It fits easily in a hiker’s pack. But this 17th Century barometer, invented by Italian scientist and mathematician Evangelista Toricelli, was huge and heavy. Mercury is more than ten times heavier than water. Carrying this instrument must have made the hike a challenge.

Why did they bring such an instrument? They wanted to know how air pressure changed with altitude in the atmosphere. The barometer would allow them to measure this.

They found that at higher elevations on the side of the Puy de Dome the mercury level in the glass column was lower than it was at lower elevations. They concluded that the differences in height of the mercury were caused by differences in the weight of air above. As they went up the mountain there was less atmosphere above them, and thus less weight of air to compress the mercury. Based on this finding, Pascal concluded that a vacuum exists above the atmosphere.

Atmosphere Atop the Alps

In 1787, Horace Benedict de Saussure climbed to the summit of Mont Blanc in order to explore the atmosphere. Just a year before, this rugged peak in the Alps had been successfully climbed for the first time. It’s the highest point in Europe with a summit elevation of 4810 meters (15781 feet) above sea level. Saussure made it to the top carrying a barometer and thermometer with him and making measurements along the way. By this time, smaller and more portable instruments were available than the unwieldy barometer Pascal and Perier carried with them in 1648.

Saussure was an Earth scientist as well as a mountaineer. It was a challenging climb. Even through he had to cut the time he spent on the mountain a bit short because he was weakened by altitude sickness, the measurements Saussure made were very valuable. They demonstrated that air temperature decreases with height in the atmosphere by about 0.7 C per 100 meters. With that information, Hermann von Helmholtz and others deduced that about 30 km high in the atmosphere the temperature would be -273 C (-460 F). At that temperature, no heat remains. It is known as absolute zero.

Absolute zero is thought of as the lowest temperature possible. It has never been found even with modern technologies, although 21st Century scientists have come very close. In the 18th Century when Helmholtz was doing his calculations, temperature that cold was off the charts. It would be about 60 years before Lord Kelvin invented a temperature scale that used absolute zero as its zero value.

Thus, when Helmholtz announced that absolute zero might be out there, there was a lot of interest among scientists in exploring this high in the atmosphere in order to find absolute zero.

Higher Than Any Other Balloon

Henry Coxwell and James Glaisher delayed their balloon flight on September 5, 1862, because of a storm. They waited in Wolverhampton, England, until the storm calmed. Then they ascended through the clouds and into the bright sunlight above.

“A flood of strong sunlight burst upon us with a beautiful blue sky without a cloud, and below us lay a magnificent sea of clouds, its surface varied with endless hillocks, and mountain chains, and with many snow-while tufts rising from it,” James Glaisher wrote in his account of the adventure.

Coxwell was a skilled pilot of balloons. Glaisher was a scientist and had outfitted the balloon with instruments to make measurements at different altitudes on the way up into the atmosphere. They made several research expeditions in balloons, but the one they took on September 5, 1862, is the only one in which they nearly died. They flew higher than anyone ever had and it nearly cost them their lives.

Coxwell was panting for breath after ascending to about four miles into the atmosphere. They discharged sand allowing the balloon to ascend to five miles high. The temperature was well below freezing and Glaisher was still taking measurements. Coxwell was still gasping. They discharged more sand and ascended even higher.

Leaving the Ground Behind 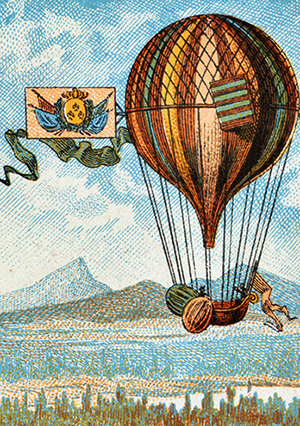 Before the late 1700s, you’d have to climb a mountain to explore the atmosphere’s high altitudes. That was before balloons. French brothers Joseph-Michel and Jacques-Etienne Montgolfier invented the hot air balloon in 1783. It was made of sackcloth with thin layers of paper on the interior held together with 1,800 buttons. On June 3, 1783, they flew for 10 minutes and went perhaps as high as 2000 meters.

With balloons, scientists were able to start exploring higher than ever before. A year after the Montgolfier brothers’ historic flight, Guyton de Moreau and the Reverend Bertrand traveled into the atmosphere above Dijon, France, aboard a hot air balloon with instruments for measuring temperature and pressure. They shot up to more than 3000 meters in the atmosphere taking measurements along the way.

Unconscious in the Stratosphere 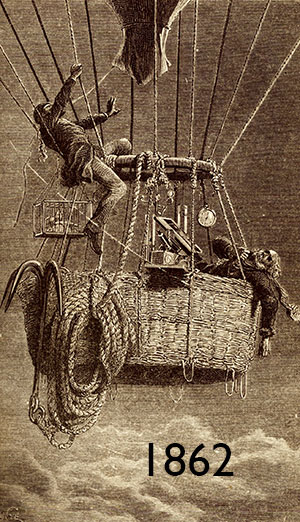 At over 29,000 feet in the atmosphere in the basket of the hot air balloon, Glaisher, started to experience disastrous impacts of the cold and altitude. He lost the use of his arms. He couldn’t move his legs. And he was aware of all of this. “I dimly saw Mr. Coxwell, and endeavored to speak, but could not,” he recalled. Glaisher passed out in the basket of the balloon.

Seeing Glaisher passed out, Coxwell knew he needed to open a valve allowing the balloon to sink lower in the atmosphere but his hands were black with frostbite and would not move. Coxwell pulled the cord for the valve with his teeth. This brought the balloon lower.

Both men survived, landing in a grassy field seven and a half miles away from where they started. Once he was safely on the ground and had regained the use of his limbs, Glaisher wondered what sort of data he would have collected had he not lost consciousness at 29,000 feet.

“The balloon must have attained an altitude of 36,000 or 37,000 feet,” he speculated. This is consistent with Coxwell’s observation of the barometer while Glaisher was out cold.

If so, then Coxwell and Glaisher made it into the stratosphere, or very nearly made it. Had Glaisher not been unconscious, he would have found interesting temperature data up there. That data wouldn’t be collected for about thirty years until technological advances allowed us to explore the atmosphere without going there. 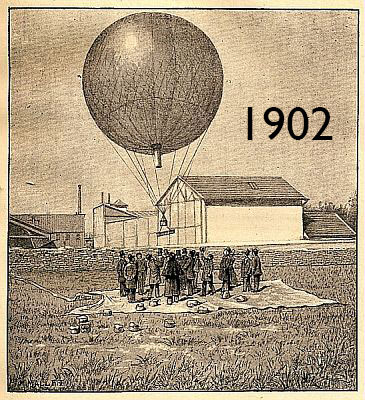 There are limits to our ability to send people up in balloons to study the atmosphere. Coxwell and Glaisher learned this the hard way during their ill-fated balloon voyage. But when the first weather balloon was invented by Gustave Hermite in the 1890s, scientists had a new way to explore the atmosphere without risking their lives.

One of the first scientists to use weather balloons was Teisserenc de Bort. He sent balloons made of materials like paper and silk high into the sky above Trappes, France, on the outskirts of Paris. His balloons were not tied closed. The gas within them - hydrogen, helium, ammonia, or methane – could escape as it expanded while the balloon rose in the atmosphere and the air pressure dropped. With less gas lifting it, the balloon would eventually drop slowly to the ground.

Teisserenc de Bort sent instruments up in balloons that recorded temperature and air pressure. He was puzzled when he looked at the data from about 200 balloons and found that at a certain height in the atmosphere, temperature no longer dropped. It stayed about the same between 8 and 13 km high in the atmosphere. This was puzzling because, at the time, it was thought that temperature kept decreasing as altitude increased. 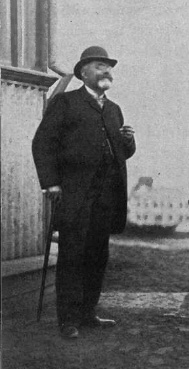 Richard Assmann, a scientist and doctor, was exploring the atmosphere above Germany at the same time that Teisserenc de Bort was exploring the atmosphere above France. Both scientists used balloons carrying instruments to collect data about how the temperature changed with altitude. And both discovered the stratosphere and shared their discoveries in 1902.

Assmann was a member of the Society for the Promotion of Aeronautics. Most of the members were interested in blimps, balloons, and other means of air travel, but Assmann was interested in using these technologies to study the atmosphere. With help from the group and others, Assmann invented weather balloons made of rubber, which were stronger and more high-flying than the paper and fabric weather balloons of the time. They returned to the ground more easily than the balloons made of cloth and paper.  As the rubber balloons rose in the atmosphere they would expand because the air pressure decreased. At a certain altitude, the rubber could no longer stretch and the balloon would explode which is why they were called Assmann’s Expansible and Exploding Balloons. After the balloon exploded, the instruments were carried to the ground by a little parachute.

Richard Assmann flew instruments on his Expansible and Exploding Balloons high in the atmosphere finding that, not only did air stop cooling at a certain altitude, it started to warm from 10 to 15 km in the atmosphere.

Assmann announced his results on May 1, 1902, not knowing that de Bort presented the same finding at the French Academy of Sciences a couple of days earlier. Both scientists are credited with the discovery of the stratosphere.

Layers of the Atmosphere