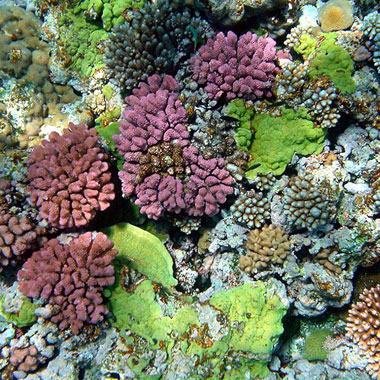 Corals in a reef near Papua New Guinea in the Southwest Pacific. Colors are largely due to different varieties of algae living symbiotically within reef corals, and other types of algae that help bind the reef framework together.
Credit: Brocken Inaglory

A coral reef is like an underwater city. Corals and algae construct the framework that rises off the tropical ocean floor and attract a diversity of inhabitants. Schools of multicolored fish glide above the structure. Invertebrates dart around on its surface. All that busy activity and life exists in a delicate balance. But some reefs have been so hard hit by environmental changes that they will not recover: scientists predict that over half of the world’s coral reefs may die by 2050 if current pressures continue to threaten reefs.

Even though human populations live on land and coral reefs live in the sea, the health of coral reefs is threatened by humans in many ways. Some of the threats are easy to see - plastic bottles and other trash litter many reefs, for example, especially those offshore from towns and cities. Sediment in the water can clog the filters of corals and water pollution can also be problematic. Overfishing and invasive species like lionfish are depleting the numbers of grazing fish in some areas. And scratches on corals from the fins of careless snorkelers, anchors, or even deep gouges from boats that have run aground are visible in many reefs.

Coral diseases, caused by certain bacteria, fungi, and viruses, occur naturally but scientists suspect that the increase in disease is due to pollution and other changes to the environment. There are more diseased corals today than there were several decades ago.

How is climate change involved with the health of coral reefs? First, some of the carbon dioxide discharged into the atmosphere from burning fossil fuels makes its way into the ocean, causing ocean water to become more acidic. Living in acidic water is tough for corals and other animals. Second, as Earth's temperature rises, much of that heat winds up in the ocean which poses a threat to the health of coral reefs. Read on for more information about acidification and warming of ocean water. 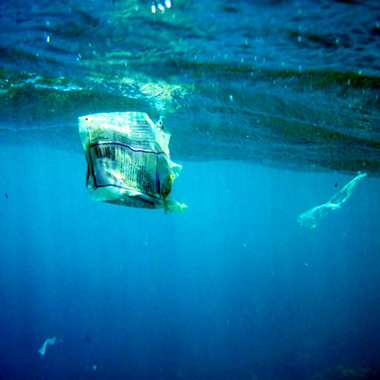 Climate change is one of many factors causing change in coral reefs. Pollution in marine environments, including plastic bags like this one in the waters of Papahanaumokuakea Marine National Monument, Hawaii, is one of those factors.
Credit: Wesley Byers/Papahanaumokuakea, HI

As the concentration of the greenhouse gas carbon dioxide increases in the atmosphere, largely from burning fossil fuels, some of it gets dissolved into ocean water. This changes the chemistry of seawater, lowering its pH, making it more acidic. Acidic water makes it difficult for coral and algae to build the reef framework.

Marine creatures such as corals, clams, snails, and many types of algae and plankton build their skeletons and shells from calcium carbonate (limestone). These creatures get the chemical building blocks they need for construction from seawater. Some, like algae, passively collect these building blocks. Others have a more deliberate mechanism for getting the calcium ions and carbonate ions from seawater. As seawater gets more acidic with more carbon dioxide dissolved in it, these creatures have a harder time making their skeletons and shells.

Calcium carbonate mineral dissolves in acid. Try it out for yourself. Put a clam shell (one that you don’t want to keep) into a container of vinegar and wait. While a pH of 7 is neutral, vinegar has a pH of 3 so it is an acid. Within a few hours its surface will become pitted with tiny dimples that you can see with a magnifying glass. Over a day or two you will notice that your clam shell is disappearing. The calcium carbonate that makes up the shell dissolves into the acidic vinegar.

Seawater's pH is not dropping as low as vinegar. The pH of seawater varies between 7 and 8, so it is a little more basic than neutral. Since the start of the Industrial Revolution, pH of seawater has dropped about 0.1. In the next century it is expected to drop another 0.1-0.35. But scientists suspect that even these small changes can make a big difference. 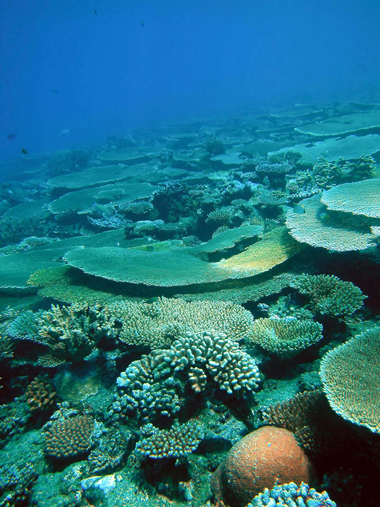 “We are only beginning to understand the complex interactions between large-scale chemistry changes and marine ecology,” said Joanie Kleypas, scientist at the National Center for Atmospheric Research in Boulder, CO. This is an area of active research.

Because reef corals build massive structures from calcium carbonate, and because those structures become a home to diverse communities of marine life, the impact of increasing acidification on corals is of particular interest to many scientists. Current research indicates that for a doubling of the partial pressure of carbon dioxide (pCO2), rates of calcification decreased in corals an average of 30%. The rate is affected by many other factors besides the concentration of CO2 dissolved in the water. The temperature, light, and nutrients all affect calcification rates, too. Lower rates of calcification will likely impact marine food webs, possibly changing the biodiversity of the ocean.

“This threat is hitting coral reefs at the same time that they are being hit by warming-induced mass bleaching events,” said Chris Langdon, a University of Miami scientist. Coral reefs are currently responding to many other threats such as warmer water, overfishing, and coral diseases, so the effects might be worse.

As the Earth warms, heat makes its way into the ocean. While most corals live in the warmth of the tropics, the water can become too warm for them. When waters heat up, corals get stressed and go through a process called bleaching which makes them look as white as their skeletons. In fact, bleaching makes the corals transparent, so their white appearance actually is their skeletons.

To understand how coral can turn as white as a ghost, it's helpful to think about what makes up healthy coral. A colony of coral is made up of hundreds, or even thousands, of individual coral animals. Each coral animal, which is much like a tiny upside-down jellyfish planted in a rocky skeleton, has algae living within its body called zooxanthellae. The algae, through the process of photosynthesis, make their own food with help from sunlight streaming through the clear, tropical ocean water. The algae produce more food than they need. Corals consume the leftovers. And the corals offer the algae a nice place to live. It's an example of symbiosis, a relationship on nature that's beneficial to both. 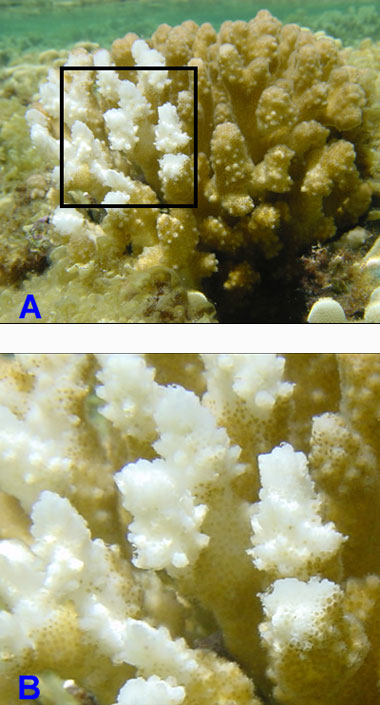 Partially bleached coral colony (Pocillipora sp.) on a Pacific reef (A). Areas that have expelled symbiotic algae appear white. Close view of bleached area (B). Individual coral animals within the colony that still have some of their symbiotic algae are visible as yellow-brown spots.
Credit: NOAA

However, during times of environmental stress, the coral animals will release the colorful algae from their tissues, which is what causes the coral to appear white. Corals bleach for a number of reasons (and scientists are  studying coral bleaching to better understand what causes it) but one of the main triggers is unusually warm seawater. Corals are very sensitive to changes in temperature. Water that warms only one degree Celsius can cause corals to bleach. The ocean is warming as climate changes, and, thus, the amount of bleached corals is expected to become more pronounced. Plus, the part of the ocean that warms the most is the sea surface and most reef corals live quite near the sea surface.

There are other reasons that corals bleach. Corals may bleach if salinity changes, if there are high levels of solar radiation (typically during summertime), if the reef is in the path of a large storm, if there is pollution in the water, or if sediment runoff from land makes its way to the reef. While bleaching is a natural reaction, it has become more common as human impacts on the ocean have grown. Some species of coral are more susceptible to bleaching than others. In general, coral species that form branching, tree-like colonies are more susceptible to bleaching than coral species that form round, boulder-like colonies. Some species of the algae are more sensitive to environmental stress too.

Bleaching weakens the coral animals. Once bleached, many corals can not recover. Without the algae, the bleached corals have less nutrition. They are able to catch and eat plankton, but this is not as much food as they are used to having. If the stressful conditions end, corals can take more algae into their tissues and regain their health. If the stressful conditions continue, the corals are likely to die.

Thousands of other organisms call coral reefs home – from large sharks and rays to tiny shrimp and worms. If most of the corals on a reef bleach (in what is called a “mass-bleaching event”) and then die, this can impact the survival of creatures that rely on the reef - either directly by feeding on corals or indirectly by relying on the reef structure for habitat.

As tropical waters continue to warm, coral reefs will bleach more often than they are able to handle without long-term damage or death. Bleaching events have already had a large impact on many reefs and will likely become more frequent in the future. This will reduce coral cover and diversity on reefs over the next few decades, although hopeful recent research suggests that some of the world's reefs might be protected if areas of the ocean are able to maintain a desirable temperature range.