Effects of Climate Change on Ecology

Our climate is warming, which is changing the physical environments that support living systems. In the ocean, water temperatures are rising and becoming more acidic. On land, temperatures are rising as well, and soil health and freshwater quality are declining. In many places, environments are changing so fast that plants and animals cannot keep up, endangering entire ecosystems.

Rising temperatures cause shifting ecosystems, either expanding or decreasing the geographical range of specific types of habitats, or changing the timing of seasons. For example, a study of European butterflies found that populations had shifted north by 114 km between 1990-2008 due to increasing temperatures and expansion of suitable habitat. 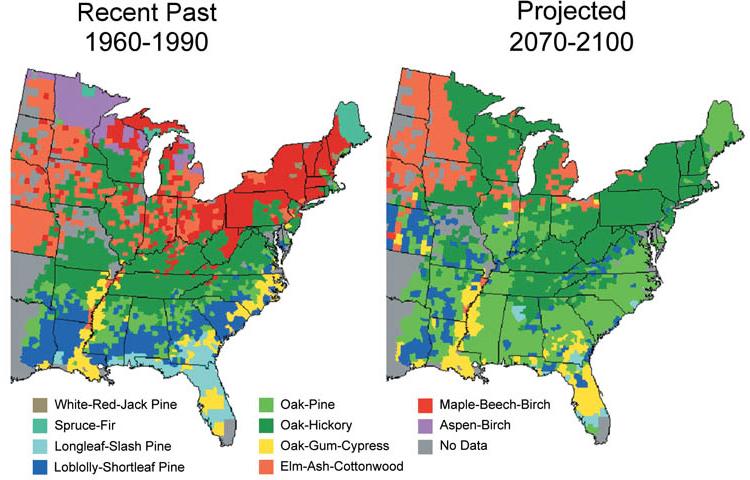 Forest types are projected to shift as the climate continues to warm. Notice that the Maple-Beech-Birch forests of the Northeast (red) are replaced with Oak-Hickory forests (green) when run under a lower emissions climate model scenario. Credit: EPA

Sometimes this expanding range brings new invasive species, which can cause native species to decline or go extinct, which alters the ecosystem. Slight changes in temperature are enough to cause spring thaw to happen earlier and fall frost to come sooner, which changes the timing of the growing season for plants and trees. This changes the availability of food, which can affect the size and health of populations within an ecosystem.

As temperatures continue to rise, many species are no longer able to thrive in places where they once lived. Scientists estimate that 8% of current animal species are at risk of extinction due to climate change alone.

Near the equator, a region with Earth’s highest biodiversity, many species are not able to adapt to rising temperatures. Reef fish are already living in the warmest water that they can tolerate and cannot survive as the water warms even more. It is also estimated that by 2070 nearly 20% of tropical plant species will be unable to germinate because of temperatures beyond their upper limit.

The frequency of hot, dry conditions increases as the climate warms, which intensifies wildfires. In the western United States, projections show that a 1°C rise in global temperature increases the average area burned by wildfires each season by 600%, impacting local populations of plants and animals in the path of the fires. The bushfire that burned over 25 million acres in Australia during 2019-2020, which started due to a lightning strike following an especially hot, dry spell, killed an estimated one billion animals. Many of the animals that died in these fires are found only in Australia, which raises concern about the future of these unique ecosystems. While local plant and animal populations usually recover following a fire, species that only exist in very small numbers or are found only in limited places are at higher risk for global extinction.

Scientists see a correlation between climate change and the increase of severe weather events, which can significantly impact species and ecosystems in a short amount of time. For example, in 2019, an extreme heatwave hit Cairns, Australia, causing the death of one-third of the spectacled flying foxes in just two days as temperatures climbed to 42°C (about 108°F). Even though animals such as flying foxes are adapted to the typical Australian heat, we see that they are unable to survive the extreme temperatures that are becoming more common due to climate change.

The intensity of tropical storms and hurricanes is also increasing due to warmer sea surface temperatures, causing more disruption to coastal plants and animals as habitat is changed or destroyed when the storms make landfall. The severe flooding and winds from these storms can impact ecosystems by disrupting nutrient cycling and the growth of plants. As the climate warms, more areas are affected by tropical storms and hurricanes, which means that more ecosystems are vulnerable to damage from extreme weather than in the recent past.

Sea level rise is causing the loss of coastal ecosystems.

Rising seas are displacing hundreds of thousands of people along the coasts and causing the loss of wetland ecosystems. By 2080 as much as 22% of the planet’s wetlands could be lost due to sea level rise. Coastal Louisiana, US, which has over two million acres of wetlands, is losing about a football field worth of land every 45 minutes, which is faster than almost any other place on Earth. Wetlands ecosystems protect coastlines from floods and store three times as much carbon as forests, which is important for mitigating climate change. The loss of coastal wetlands due to climate change threatens the diverse species of plants and animals that live within them, and impacts fishing economies that depend on marine life.

Ecosystems change along the Gulf of Mexico wetlands, as marsh grasses (left) are replaced by mangrove forests (right) due to warmer winters. Credit: LA-SAFE

Coral reefs are dying due to warming ocean temperatures. 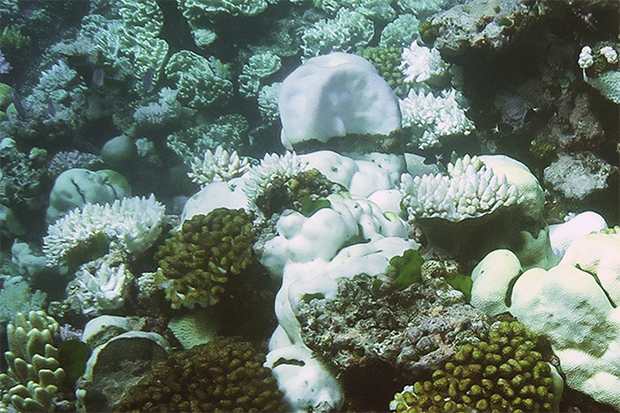 Healthy coral in Australia’s Great Barrier Reef are brown and green, while bleached coral that have been damaged due to warming ocean temperatures are white. Credit: NOAA

Studies estimate that one third to one half of the Earth’s corals have been lost, due in part to the warming ocean. When average ocean temperatures rise just 1°C, the coral become stressed and expel the symbiotic algae that make their food, resulting in the appearance of white coral (called coral bleaching). Though coral reefs cover less than one percent of the ocean floor, they support about 25% of all life in the ocean. The loss of coral reefs threatens marine ecosystems that depend on reefs as nurseries for fish and other marine species. Coastlines normally protected by coral reefs are also more vulnerable to erosion and storms.

In this Coral Reef Watch Alert Area map for January-December 2016, severe bleaching was reported in areas circled in white. Note that there aren't any coral reefs in the "No Stress" category, a sign that warming temperatures due to climate change are endangering coral reefs on a global scale.

Melting ice is causing habitat loss in the polar regions.

Antarctica is losing three times as much ice today as it was 25 years ago, and trillions of tons of ice are melting from the Greenland Ice Sheet each year due to climate change. The warming of the polar regions creates fragmented habitats for species that depend on the ice for survival, such as caribou and polar bears in the Arctic. In the Antarctic, melting is changing the distribution of penguin colonies and allows new plant species to establish in areas once covered in snow and ice year-round.