Scientists from around the world serve as part of the Intergovernmental Panel on Climate Change (IPCC). These scientists have found that from 1900-2020, the world's surface air temperature increased an average of 1.1° Celsius (nearly 2°F) due to burning fossil fuels that releases carbon dioxide and other greenhouse gases into the atmosphere. This may not sound like very much change, but this warming is unprecedented in over 2000 years of records. Even one degree can impact the planet in many ways. Climate models predict that Earth's global average temperature will rise an additional 4° C (7.2° F) during the 21st Century if greenhouse gas levels continue to rise at present levels. Without swift action to reduce greenhouse gas emissions, models project that holding global average temperatures to within a 1.5-2.0°C (2.7-3.6°F) increase may no longer be possible.

Climate change is predicted to impact regions differently. For example, temperature increases are expected to be greater on land than over oceans and greater at high latitudes than in the tropics and mid-latitudes.

Warmer temperatures will cause (and are causing) changes to other aspects of climate - such as rain, snow, and clouds. They are also causing changes to the ocean, life, ice, and all other parts of the Earth system.

A warmer average global temperature will cause the water cycle to “speed up” due to a higher rate of evaporation. More water vapor in the atmosphere will lead to more precipitation. Global average precipitation can increase by 7% for each degree of warming, which means we are looking at a future with much more rain and snow, and a higher risk of flooding to some regions. With a 2°C temperature increase, heavy rain events are expected to become 1.7 times more likely, and 14% more intense. However, changes in precipitation will not be evenly distributed. Some locations will get more, and others will see less.

As the climate warms, snow and ice melt. It is predicted that the melting of glaciers, ice sheets, and other snow and ice on land in the summer will continue to be greater than the amount of precipitation that falls in the winter, which means a decrease in the total amount of snow and ice on the planet. Over the past 100 years, mountain glaciers in all areas of the world have decreased in size and so has the amount of permafrost in the Arctic. Greenland's ice sheet is melting faster, too. The amount of sea ice (frozen seawater) floating in the Arctic Ocean and around Antarctica is expected to decrease. Already the summer thickness of sea ice in the Arctic is about half of what it was in 1950. Arctic sea ice is melting more rapidly than the Antarctic sea ice. Melting ice may lead to changes in ocean circulation, too. Although there is some uncertainty about the amount of melt, summer in the Arctic Ocean will likely be ice-free by the end of the century.

A warmer climate causes sea level to rise via two mechanisms: (1) melting glaciers and ice sheets (ice on land) add water to the oceans, raising the sea level, and (2) ocean water expands as it warms, increasing its volume and thus also raising sea level. Since 1880, sea levels have risen about 0.10 to 0.20 meters (0.3 to 0.75 feet) depending on region and location. Thermal expansion and melting ice each contributed about half of the rise, though there is some uncertainty in the exact magnitude of the contribution from each source. By the year 2050, models predict sea level will rise an additional 0.25 to 0.30 meters, and by 2100, without immediate reductions in greenhouse gas emissions, global sea level rise is expected to be on the order of 1.1 meters (3.5 feet). Some low-lying areas could experience even higher levels, threatening coastal communities, wetlands, and global trade. Even if swift emission reductions occur, the greenhouse gases levels currently present will still likely result in about 0.6 meters (2 feet) of sea level rise by the end of the century.

Earth’s oceans are predicted to act as a buffer against climate change by taking up some of the excess heat and carbon dioxide from the atmosphere. This is good news in the short run, but more problematic in the long run. Carbon dioxide combined with seawater forms weak carbonic acid. Scientists believe this process has reduced the pH of the oceans by about 0.1 pH since pre-industrial times. Further acidification of 0.14 to 0.35 pH is expected by the year 2100. Higher acidity in the ocean causes problems for coral reefs and other marine organisms.

Large-scale ocean currents called thermohaline circulation, driven by differences in salinity and temperature, may also be disrupted as the climate warms. Changes in precipitation patterns and the influx of fresh water into the oceans from melting ice can alter salinity. Changing salinity, along with rising water temperature, may disrupt the currents. In an extreme case, thermohaline circulation could be disrupted or even shut down in some parts of the ocean, which could have large effects on climate.

Some climate scientists believe that hurricanes, typhoons, and other tropical cyclones will change as a result of global warming. Warm ocean surface waters provide the energy that drives these immense storms. Warmer oceans in the future are expected to cause the intensification of such storms. Although there may not be more tropical cyclones worldwide in the future, some scientists believe there will be a higher proportion of the most powerful and destructive storms. Some scientists believe we already see evidence for an upswing in the numbers of the most powerful storms. Others are less convinced.

Clouds are a bit of a wild card in global climate models. Warmer global temperatures produce faster overall evaporation rates, resulting in more water vapor in the atmosphere...and more clouds. Different types of clouds at different locations have different effects on climate. Some shade the Earth, cooling the climate. Others enhance the greenhouse effect with their heat-trapping water vapor and droplets. Scientists expect a warmer world to be a cloudier one, but are not yet certain how the increased cloudiness will feed back into the climate system. Modeling the influence of clouds in the climate system is an area of active scientific research.

Ocean ecosystems will change as sea-surface temperatures continues to warm. Animals like fish are able to move to other ecosystems with cooler water at higher latitudes. But many marine organisms – like kelp and corals – that aren’t able to swim elsewhere are at high risk. Warmer waters in the shallow oceans have contributed to the death of about a quarter of the world's coral reefs in the last few decades. Many of the coral animals died after being weakened by bleaching, a process tied to warmed waters.

Risks to Life on Land

Changes in temperature, precipitation, and seasonal timing will alter the geographic ranges of many types of plants and animals. Since species can only survive if they are in a habitat that suits their needs, many species will face extinction if the geographic range where they can survive shrinks. If warming is kept to 2°C, 18% of insects, 16% of plants, and 8% of vertebrate animals are projected to lose over half of their geographic range. However, if we can keep the amount of warming to 1.5°C, the habitat loss to insects, plants, and vertebrates decreases by about a half. On the other hand, the range of some species, such as mosquitos which carry different types of diseases, may increase due to climate warming. Warming surface temperatures are also predicted to increase the frequency of heat waves and droughts, which can affect crop production, increase the risk of wildfires, and even impact human health. 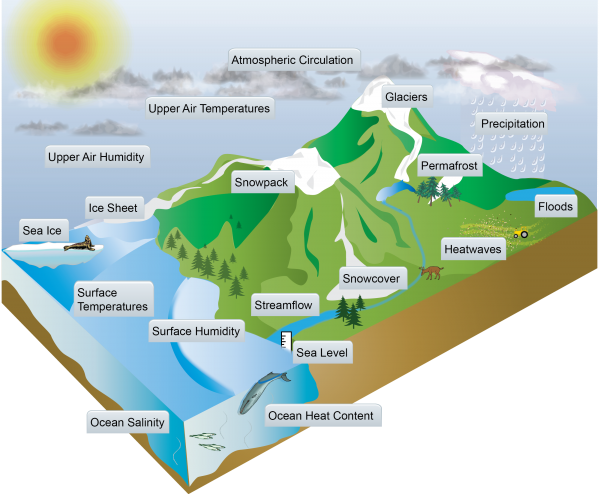 Climate change is causing many other aspects of Earth to change, including the examples noted in this graphic. Using models, scientists can project how these aspects of Earth are likely to change in the future as the climate continues to warm.
Credit: NOAA NCDC

Abrupt changes are also possible as the climate warms

Some changes to the climate are gradual and predictable, while others are more sudden and difficult to foresee. The latter is often referred to as “tipping points.” A tipping point is a large, abrupt change that cannot readily be stopped at the last minute, even by employing drastic measures. Possible tipping points include:

The collapse of major ice sheets in Greenland and Antarctica

Melting of these ice sheets is an ongoing process. However, there are signs that moderate melting may accelerate into a runaway situation that leads to a relatively sudden loss of large amounts of ice. Such a collapse could lead to dramatic changes in sea level and could also impact ocean circulation.

If the ocean’s circulation changed dramatically or even shut down altogether, the transfer of heat in the climate system would be altered in a huge way.

A sudden release of methane

If the potent greenhouse gas methane were released rapidly from its stores in Arctic permafrost and special ices beneath the seafloor (called methane hydrates or clathrates), the rate of warming would increase. Methane releases would generate a feedback loop of increased greenhouse warming by methane, driving further methane emissions. Some scientists suspect that sudden increases in methane may have played a role in major extinction events in the past.

Today, the ocean is absorbing CO2 that would otherwise stay in the atmosphere. At some point, seawater will become saturated with CO2 and unable to absorb any more. At that point, anthropogenic emissions of CO2 would all land in the atmosphere, increasing the rate of greenhouse warming. Acidification of the oceans could also disrupt marine life, causing photosynthesizing plankton to succumb, preventing them from removing CO2 from the air. Shells of many types of marine organisms might begin to dissolve in the presence of the acidic oceans, releasing the carbon stored within the shells back into the environment.

None of these tipping points are considered very likely to occur over the next several decades. Still, the consequences of any of them are so severe, and the fact that we cannot retreat from them once they’ve been set in motion is so problematic, that we must keep them in mind when evaluating the overall risks associated with climate change.