Polar bears live in one of the world’s harshest environments: the Arctic. Roaming across sea ice, polar bears peer through cracks in the ice to look for ringed seals, their favorite food, in the water below. Almost all of a polar bear’s food comes from the sea, and includes seals, fish, and even beluga whales. The floating sea ice is a perfect vantage point for the bears as they hunt for food. Unfortunately, the amount of sea ice floating in the Arctic region is shrinking each year. The ice is melting as the Earth is warming. Within the next couple of decades, there may be no more sea ice in the Arctic Ocean during the summer,

Polar bear habitat is melting away.

Polar bears have adaptations that help them spend part of their time in the water. They are streamlined for swimming and have a layer of fatty blubber that keeps them warm. Polar bears even have tiny webs between their toes that help them swim through the water. They are classified as marine mammals even though they do not live in the water full-time like whales, dolphins, manatees, and other marine mammals. However, even with adaptations that make them exceptional swimmers, polar bears have recently been found drowned for the first time. Because pieces of sea ice are getting smaller and further apart, the bears must swim farther, 60 miles or more, to get from one piece of ice to another. Some become exhausted during the long journey and drown. 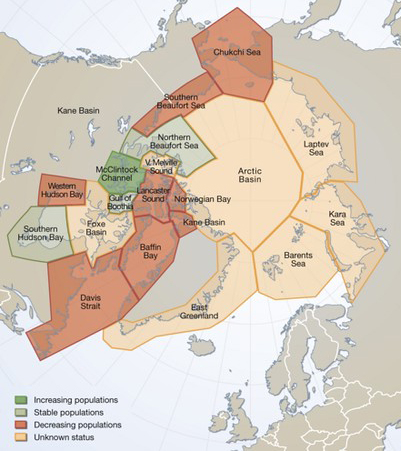 The map above shows the distribution and of polar bear populations in the Arctic and whether they are increasing, stable, decreasing, or unknown.
Credit: Hugo Ahlenius (GRID-Arendal)

Not all bears are equally at risk.

There are polar bears living all around the Arctic. Eight groups, or populations, of polar bears are declining in numbers. A couple of populations are stable or growing. And we don't know about the rest of the polar bear populations. At the northern edge of North America, polar bear populations are particularly vulnerable. Polar bears are moving to land on the north coast of Alaska because the sea ice is melting and no longer connects to shore. This separates the bears from their preferred hunting grounds, the sea ice. With less sea ice, polar bears cannot hunt for food as often, and so they wind up with less to eat. Polar bears, it has been reported, occasionally eat land animals like reindeer and musk oxen. Even so, scientists have found that polar bears weigh less than they used to and that polar bear cubs off the North coast of Alaska are less likely to survive. In Canada’s Hudson Bay the number of bears has dropped 22 percent.

What does the future hold?

Throughout the Arctic, polar bear populations are projected to decline by 30% by 2050, according to the World Wildlife Federation. A study published in 2020 took a detailed look at which polar bear populations are most at risk over this century. The scientists compared the needs of polar bears with Earth system model projections of temperature and sea ice for different areas of the Arctic. They found that as the climate continues to change, polar bear cubs are the most vulnerable and are at risk of not surviving to adulthood. If greenhouse gas emissions remain high, cubs will be at risk in 12 out of the 13 bear populations that the researchers studied by the end of this century.

On a more positive note, the scientists found that if greenhouse gas emissions are reduced to be more moderate over this century, polar bears in some parts of the Arctic will be able to survive even with increased risks.

As sea ice melts, polar bears are moving onto land for at least part of the year. This female polar bear and her cub are on the north coast of Alaska near the town of Kaktovik. On land, food is limited for polar bears.
Credit: USGS