With data visualizations, we can see the entire planet from all angles at once.  We can see the invisible – such as water vapor in the atmosphere and the way air flows around the world.

For example, the visualization below might look like clouds moving around the planet, but it’s actually made from tons of numbers. This is a visualization of climate model data over a hypothetical year. The opacity of white indicates how much water vapor is in the sky - places that look whiter in the visualization have high water vapor. The brightness of the orange color is precipitable water - places where rain and snow are likely.

How was it made?

According to Tim Scheitlin, software engineer in the Scientific Visualization Services Group at the National Center for Atmospheric Research (NCAR), this is how the visualization above was developed. 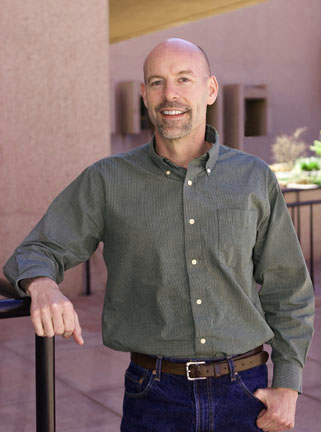 First, climate scientists at NCAR ran the atmosphere component of a climate model on a supercomputer until it had churned out data for 365 hypothetical days at high resolution, which produced an enormous amount of data– hundreds of gigabytes.

That amount of data is not uncommon. In fact, model runs are now producing terabytes of data. (For reference, a terabyte of data would fill up 62 iPhones that each has 16 gigabytes.) The data from the model included numbers for aspects of the atmosphere like humidity, wind speed, and wind direction for each hour of a virtual year in thousands of locations around the world. All that data adds up.

“It’s hard to look at that many numbers and make sense of them without visualization,” said Tim.

The scientists handed off the data to Tim and the Scientific Visualization Services Group. With some changes in format, the data was sent into a program called the NCAR Command Language (NCL). After deciding which colors corresponded to which values, an image of the data was made for each type of information. For example, one image holds the water vapor information shown in white. Another image holds the precipitable water information shown in orange. Those images are then layered over a satellite image of Earth.

One final composite image was made with the data from each hour of the modeled year. With 365 days in the year, and 24 hours in each day, that means they produced 8760 images. Each image became one frame in this animation.

Why did they do this?

This was an experiment. Climate scientists at NCAR wanted to know what the climate model would produce at very high resolution, much higher than is typical for a climate model.

In this visualization made from the model data you can see tropical storms and hurricanes spin through the Atlantic and humidity and rain well up over India as monsoon season begins in the middle of the year. Pulses of orange indicate daily rain over the South American rainforest. This climate model run at high resolution looks a lot like weather. That’s a good sign that the model is a good approximation of our planet.

You, too, can visualize the invisible!

People with backgrounds in software engineering, earth science, and graphics work together to make sure that visualizations of our planet are both visually engaging and scientifically accurate.

The path to becoming a visualization expert is not the same for everyone. Check out this infographic to learn about the paths that other people have taken as they visualize science.