Models use mathematical equations to describe the behavior of factors that impact climate. To study the climate as accurately as possible, a model must be a good representation of the whole Earth, known as an Earth system model. These models are very complex, made of hundreds of equations describing the processes of the atmosphere, Sun, ocean, water cycle, land, and life, and require supercomputers to run.

Scientists continue to improve models so that they are able to accurately include details such as clouds, rainfall, evaporation, and sea ice. Thousands of climate researchers use models to better understand the long-term effects of global changes such as increasing greenhouses gases or decreasing Arctic sea ice. The models are used to simulate conditions over hundreds of years, so that we can predict how our planet's climate will likely change. 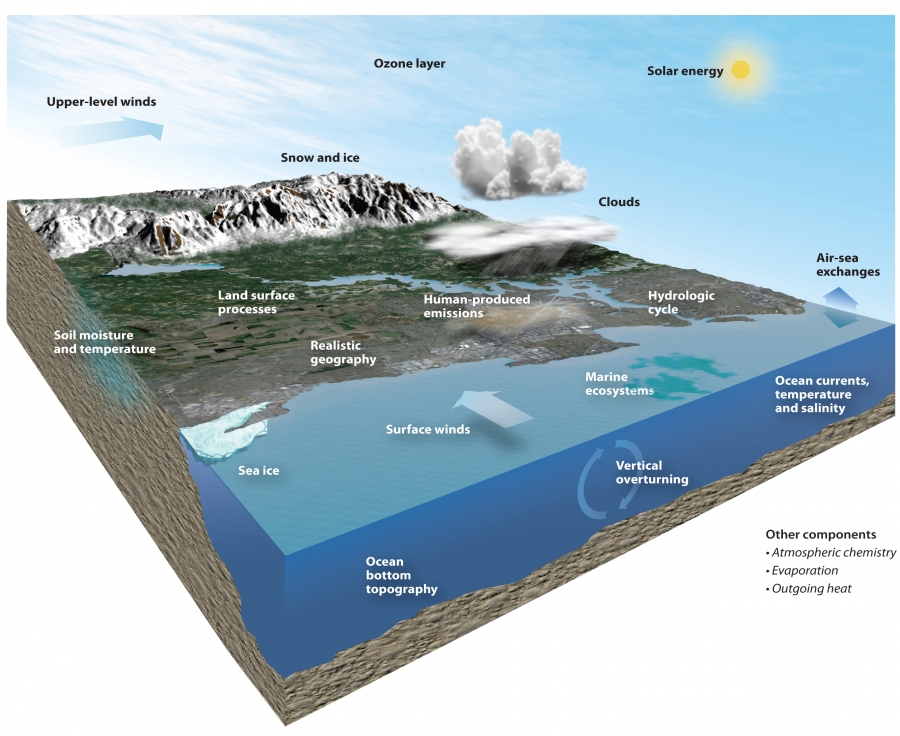 The Community Earth System Model (CESM) simulates processes in our climate system including the atmosphere, land, ocean, ice, ecosystems, and solar energy. The CESM, created by scientists at NCAR, the Department of Energy, and collaborators, is one of the world’s most sophisticated models of global climate and is run on NCAR's supercomputer.

Models can help us understand climate change in different places.

Models take into account that traits like temperature vary over the surface of the Earth. A model essentially places "virtual weather stations" at intervals around the modeled Earth and reports the calculations at each station. Models use grids of "cells" to establish the locations of these virtual weather stations which are located at the corners of the grid cells. Small processes that happen between a model's grid points aren’t included in the model results, but they can be accounted for in other ways.

Models can help us understand climate change over time.

Climate modelers must also decide how close together in time (model time, that is) to make their calculations. Temporal resolution refers to the size of the time steps used in models, or how often calculations of the various properties being modeled are conducted.

As is the case with spatial resolution, computing-time increases as temporal resolution increases, so if conditions in the model world are calculated very frequently, the model takes a very long time to run.

An Earth system model run for a century with time steps of 30 minutes would involve 1,753,152 (the number of half-hours in a century) time steps. All model parameters (temperature, wind speed, humidity, etc.) would be calculated at each of the thousands to millions of grid points in the model at each of those time steps. That's a lot of calculating, which is why high-resolution models need to be run on supercomputers.

Researchers work hard to ensure that natural processes are represented in climate models as accurately as possible, so that the climate projections from the models are as accurate as possible. There are processes and feedbacks between different parts of the Earth system that are not fully understood and are areas of active research. For example, the effects of clouds on climate are known to be a significant, but more research is needed to fully understand how these processes work. As a result, clouds are difficult to accurately represent in models. Because there are still details that we don’t fully understand within the Earth system, there are scientific sources of uncertainty in models.  According to the IPCC, while models do not perfectly represent climate processes, they clearly indicate that Earth's average temperature is warming due to human influences.

However, most of the unknowns in future climate projections are not related to Earth processes or the accuracy of models. Instead, the uncertainty comes from not knowing how much pollution humans will be adding to the atmosphere in the future. Innovations that stop or limit the amount of greenhouses gases that are produced, legislation that changes the amount of pollutants that are permitted, and how the growing human population lives in the future are all at least somewhat unknown.

Because the behavior of humans in the future is uncertain, models are run using a number of different scenarios, with each scenario addressing a different possibility for the amount of population growth, fossil fuel use, technological advancement, economics, and land use changes. With scenarios, each model run becomes more or less an "if-then" statement such as: "if humans were to act this way, then Earth's climate would warm by this much." These scenarios are a way to make a range of predictions of future climate change based on a range of ways that humans may live, work, and populate the Earth in the future.