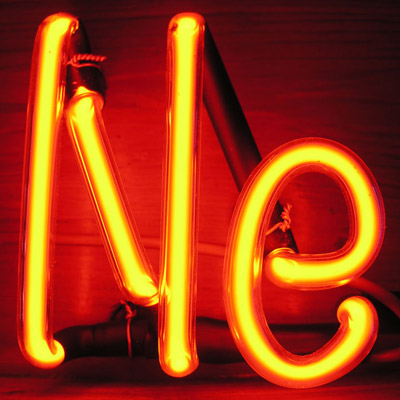 Electricity has converted the neon gas in this light into a plasma, causing it to glow orange.

Plasma is one of the four common states of matter. A plasma is an electrically charged gas. In a plasma, some electrons have been stripped away from their atoms. Because the particles (electrons and ions) in a plasma have an electrical charge, the motions and behaviors of plasmas are affected by electrical and magnetic fields. This is the main difference between a gas and a plasma.

Most plasmas are created when extra energy is added to a gas, knocking electrons free from atoms. High temperatures often cause plasmas to form. Atoms in a hot gas are moving so fast that when they collide with each other they sometimes knock electrons loose. High energy photons, from gamma rays or X-rays or ultraviolet radiation, can also create a plasma by knocking electrons away from their atoms. High-voltage electricity can also create plasmas.

Plasmas sometimes are created by humans. Some types of electrical lights contain plasmas. Electricity in fluorescent lights creates a plasma. Colorful neon lights, often used in signs, also use electricity to convert a gas into glowing plasma. Certain types of flat-screen televisions make use of plasma as well.

Plasmas are also common in nature. In fact, plasma is the most common state of "ordinary" matter (that is, all matter other than the mysterious "dark matter" that astronomers have been puzzling over in recent years) in the universe. Far more matter is in the plasma state than in the liquid, solid, or gaseous states. Lightning strikes create plasma via a very strong jolt of electricity. Most of the Sun, and other stars, is in a plasma state. Certain regions of Earth's atmosphere contain some plasma created primarily by ultraviolet radiation from the Sun. Collectively, these regions are called the ionosphere. The extreme upper layers of Earth's atmosphere, the thermosphere and exosphere (and to a lesser extent the mesosphere), also contain a fair amount of plasma mixed in with gas atoms and molecules. Above the atmosphere, Earth is surrounded by a magnetic "bubble" called the magnetosphere. Most of the particles in the magnetosphere are ionized plasma.

Electric and magnetic fields often channel the flow of charged plasma particles. Plasma in Earth's magnetosphere sometimes flows along Earth's magnetic field towards the polar regions, creating the colorful light shows in the sky which we call the aurora or Southern and Northern Lights. These beautiful displays occur when energetic plasma particles collide with gases in the atmosphere, causing them to glow in much the same way that fluorescent and neon lights shine. Prominences, giant loops of glowing matter suspended above the Sun, are another example of beautiful natural light shows created by plasmas.