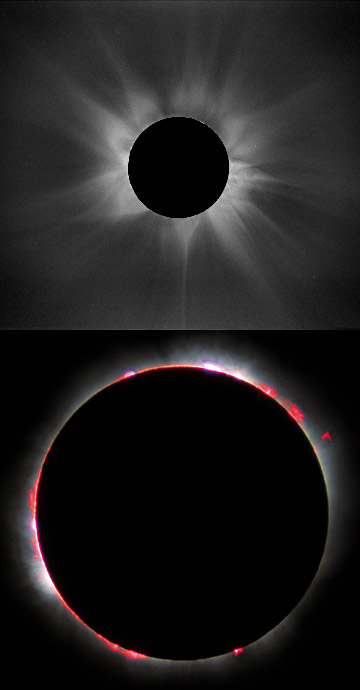 The two main regions of the Sun's atmosphere as seen during an eclipse: corona (top) and chromosphere (bottom).

Did you know that the Sun has an atmosphere?

The lower region of the solar atmosphere is called the chromosphere. Its name comes from the Greek root chroma (meaning color), for it appears bright red when viewed during a solar eclipse.

A thin transition region, where temperatures rise sharply, separates the chromosphere from the vast corona above. The uppermost portion of the Sun's atmosphere is called the corona, and is surprisingly much hotter than the Sun's surface (photosphere)!

The upper corona gradually turns into the solar wind, a flow of plasma that moves outward through our solar system into interstellar space. The solar wind is, in a sense, just an extension of the Sun's atmosphere that engulfs all of the planets. Earth actually orbits within the atmosphere of a star!