In this activity, students create molecule models using marshmallows to understand and explain how smog forms. 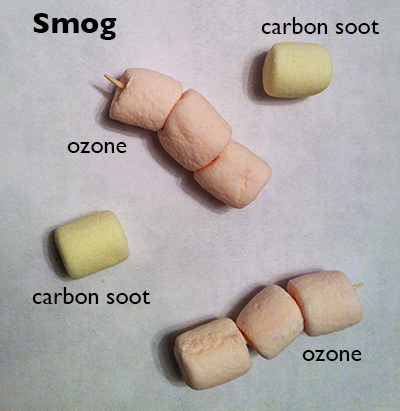 Students explain what they learned:

Ozone molecules (O3) have three oxygen atoms. While these molecules play an important role in the stratosphere, shielding Earth from harmful radiation, they are one of the primary components of smog when they are near the ground. As an air pollutant at ground level, ozone forms from other pollutants that are released from vehicle emissions, factories, and other sources. In the presence of sunlight, other pollutants are broken apart and ozone is formed as the free oxygen atoms attach to oxygen molecules. One of the main ways this happens is when nitrogen dioxide, an air pollutant, is broken apart into nitric oxide (NO) and oxygen (O) in the presence of sunlight. The single oxygen atom bonds to oxygen molecules (O2) to create ozone (O3). This is the process that students model in this activity.

Soot is a type of particulate matter and comes from many sources including the burning of fossil fuels and wood. Soot is another component of smog. In this activity, students add soot to their models as well. Other components of smog include nitrogen oxides, Volatile Organic Compounds (VOCs), and PAN (peroxyacetyl nitrate). Nitrogen oxides mostly come from the engines of cars and trucks. VOCs are given off by paint, gasoline, and pesticides. PAN is a type of pollution that is made by chemical reactions between other kinds of pollution.

When air is polluted, people breathe in ozone, particles like soot, and harmful gases that can hurt their lungs, heart, and overall health. Air pollution can cause coughing, burning eyes, and breathing problems. Fortunately, people usually start to feel better as soon as air quality improves, but not always. The elderly, the young, and those with cardiopulmonary disease, such as asthma or severe bronchitis, are the most vulnerable to air pollution exposure. Children are at greater risk because their lungs are still growing. Also, they play outside and are active. As a result, pound for pound they breathe more outdoor air pollution than most adults.

Although people have no choice but to breathe the air around them, they do have choices that can help them stay healthy. They can choose to stay indoors or be less active on poor air quality days. They can avoid high-traffic and highly industrialized areas whenever possible. They can also choose to support collective efforts and take individual steps that reduce air pollution. Such actions are a positive response to a problem that can literally steal one’s breath away.