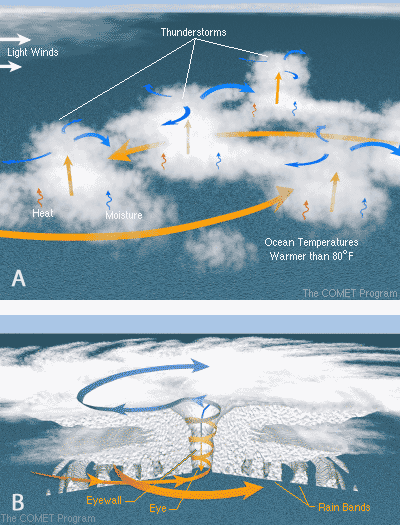 Thunderstorms, warm ocean water and light winds are the conditions needed for a hurricane to form (A). Once formed, a hurricane consists of huge rotating rain bands with a center of clear skies called the eye which is surrounded by the fast winds of the eyewall (B).

Off the west coast of Africa, just north of the equator, a thunderstorm forms. It is just a typical towering thunderstorm cloud, but it might grow into something quite different — a hurricane.

Perhaps several other thunderstorms form in the same area. And perhaps all those dark towering thunderstorm clouds begin to rotate around an area of low atmospheric pressure called a tropical depression. Drawing enough energy from the warmth of the tropical ocean water, these circling thunderstorms might grow into a single tropical storm with winds blowing more than 39 miles per hour (63 kph). If it grows even larger and winds swirl faster than 74 miles per hour (119 kph), it is called a hurricane.

This happens in many other warm, tropical areas of the world too, but only under certain circumstances. These storms are called hurricanes in the Atlantic and are called typhoons and tropical cyclones in other parts of the world. For one to form, there needs to be warm ocean water and moist, humid air in the region. When humid air is flowing upward at a zone of low pressure over warm ocean water, the water is released from the air, as creating the clouds of the storm.

As it rises, the air in a hurricane rotates. Air drawn into the center of a hurricane curves to the right in the Northern Hemisphere and toward the left in the Southern Hemisphere due to the Coriolis effect — a phenomenon in which winds curve because of the Earth's rotation. At lower latitudes, where there is no Coriolis effect, hurricanes cannot form within 300 miles (500 kilometers) of the equator.

Storms weaken when they move over areas with cooler ocean water. There isn’t nearly as much energy in the water to fuel the storm, nor is there as much humidity in the air. Hurricanes also weaken when they travel over land.

What Does a Storm Need to Form and Grow?

As a Storm Grows, It Changes

The classifications are based on the wind speeds in the storm, not the size of the storm. Hurricanes that look small on radar can have very high wind speeds, and large storms can have low wind speeds. Wind speeds in hurricanes are often measured in knots. Compared to a mile per hour, knots are a little bit faster: one knot is equal to 1.15 miles per hour. For example, if the wind is blowing at 10 knots, it's going 11.5 miles per hour.