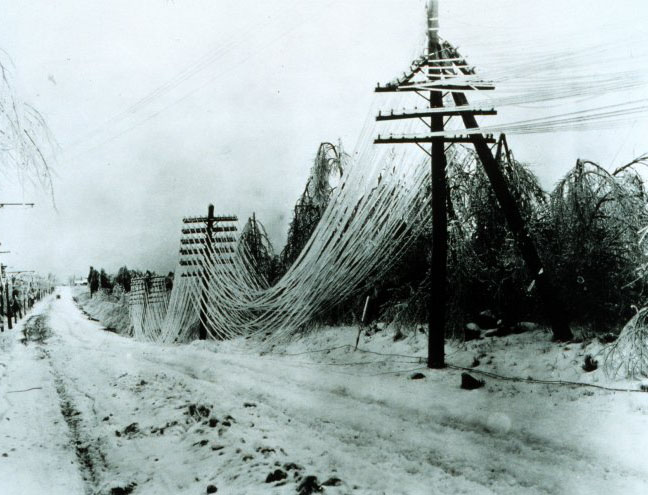 As freezing rain falls, everything on the ground is covered in a layer of ice including power lines, roads, and trees.

When meteorologists forecast a winter storm, one of the important predictions they make is the type, or types, of precipitation that are likely to fall. Will freezing rain cause an ice storm? Will ice pellets, called sleet, leave the ground covered in slush? Will it rain or snow?

To answer these questions, they look at the temperature of the air masses in the storm. When a warm air mass is pushed above a cold air mass with freezing temperatures, various types of icy precipitation can form. This type of collision of air masses is called a warm front. If the cold air mass is thick, raindrops will freeze into ice pellets called sleet. Sleet pellets are smaller than snowflakes and do not have crystal shapes. If the cold air mass is thin, the rain will be supercooled on its way down, allowing it to freeze instantly when it gets to the ground leaving a layer of ice. This supercooled rain is called freezing rain, and the resulting icy conditions are often called an ice storm.

A single winter storm can produce several different types of precipitation. Rain, snow, and other icy precipitation, such as sleet, graupel, and hail, are all possible as the air masses change and move during the storm.