"Parts" of the Sun 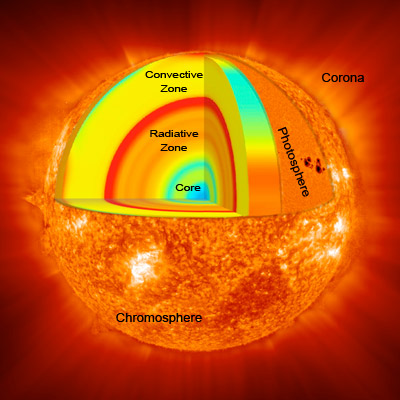 The solar interior includes the core, radiative zone and convective zone. The photosphere is the visible surface of the Sun. The solar atmosphere includes the chromosphere and corona.

What are the "parts" of the Sun? Scientists who study the Sun usually divide it up into three main regions: the Sun's interior, the solar atmosphere, and the visible "surface" of the Sun which lies between the interior and the atmosphere.

There are three main parts to the Sun's interior: the core, the radiative zone, and the convective zone. The core is at the center. It the hottest region, where the nuclear fusion reactions that power the Sun occur. Moving outward, next comes the radiative (or radiation) zone. Its name is derived from the way energy is carried outward through this layer, carried by photons as thermal radiation. The third and final region of the solar interior is named the convective (or convection) zone. It is also named after the dominant mode of energy flow in this layer; heat moves upward via roiling convection, much like the bubbling motion in a pot of boiling oatmeal.

The boundary between the Sun's interior and the solar atmosphere is called the photosphere. It is what we see as the visible "surface" of the Sun. The photosphere is not like the surface of a planet; even if you could tolerate the heat you couldn't stand on it.

Did you know that the Sun has an atmosphere? The lower region of the solar atmosphere is called the chromosphere. Its name comes from the Greek root chroma (meaning color), for it appears bright red when viewed during a solar eclipse. A thin transition region, where temperatures rise sharply, separates the chromosphere from the vast corona above. The uppermost portion of the Sun's atmosphere is called the corona, and is surprisingly much hotter than the Sun's surface (photosphere)! The upper corona gradually turns into the solar wind, a flow of plasma that moves outward through our solar system into interstellar space. The solar wind is, in a sense, just an extension of the Sun's atmosphere that engulfs all of the planets. Earth actually orbits within the atmosphere of a star!