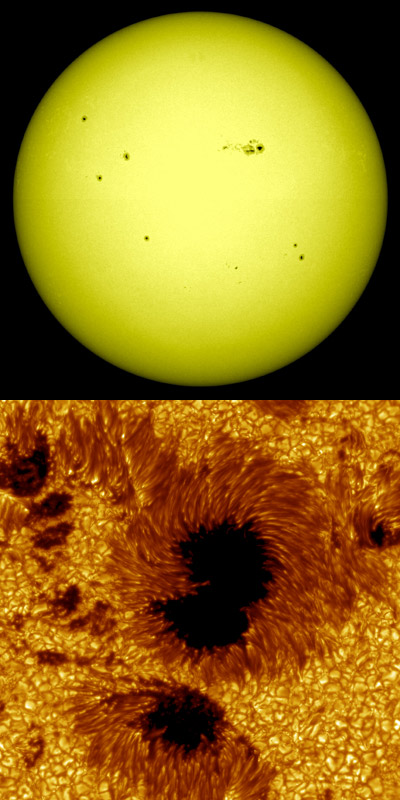 Several sunspots on the "surface" of the Sun (top) and a closeup view of a sunspot group (bottom).

Sunspots are dark, planet-sized regions that appear on the "surface" of the Sun. Sunspots are "dark" because they are cooler than their surroundings. A large sunspot might have a central temperature of 4,000 K (about 3,700° C or 6,700° F), much lower than the 5,800 K (about 5,500° C or 10,000° F) temperature of the adjacent photosphere. Sunspots are only dark in contrast to the bright face of the Sun. If you could cut an average sunspot out of the Sun and place it elsewhere in the night sky, it would be about as bright as a full moon. Sunspots have a lighter outer section called the penumbra, and a darker central region named the umbra.

Sunspots are caused by disturbances in the Sun's magnetic field welling up to the photosphere, the Sun's visible "surface". The powerful magnetic fields in the vicinity of sunspots produce active regions on the Sun, which in turn frequently spawn disturbances such as solar flares and coronal mass ejections (CMEs). Because sunspots are associated with solar activity, space weather forecasters track these features in order to help predict outbursts of "solar storms".

Sunspots form over periods lasting from days to weeks, and can persist for weeks or even months before dissipating. The average number of spots visible on the face of the Sun is not constant, but varies in a multi-year cycle. Historical records of sunspot counts, which go back hundreds of years, verify that this sunspot cycle has an average period of roughly eleven years.

Our Sun isn't the only star with spots. In recent years, astronomers have been able to detect "starspots" - "sunspots" on other stars.