Students play a board game that simulates the use of a drone aircraft to monitor a nearby volcano for signs of an impending eruption. Students engage in engineering practices as they choose the optimal suite of cameras, batteries, and sensors for their aircraft, then iteratively adjust and improve their choices over a series of simulated flights in order to maximize science data return. 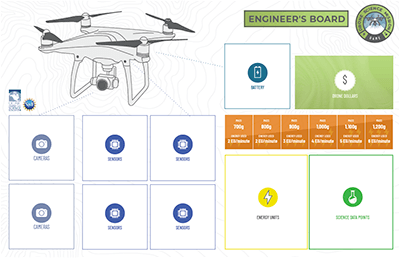 The game boards and cards look best when professionally printed. If you have a budget to do so, we recommend taking the PDF files to a printing service to have them printed and cut. However, this is not necessary for game play. Professional printing will make an aesthetically more attractive game and allow some aspects of play to go more smoothly.

If you print the game boards and cards with your school’s printer, there are a few details to be aware of:

Volcanoes emit molten lava, clouds of ash and smoke, and various gases. Large eruptions spew out tons of material and vast clouds of ash. Active volcanoes can also emit smaller amounts of lava and gases on an ongoing basis as they slowly “simmer” before or after larger eruptions.

Many volcanoes have a large, central caldera from which large eruptions flow. Most volcanoes also have multiple, smaller side vents that also emit gases. Scientists monitor activity levels at these smaller vents to help predict when a larger eruption is imminent.

Water vapor is the most abundant gas emitted by most volcanoes. Some especially violent eruptions occur when hot lava comes in contact with groundwater or ocean water. The lava quickly turns the water into steam, and the rapid expansion of the steam can cause enormous explosions. Volcanoes also emit steam, in a less dramatic and ongoing fashion, from side vents as well as from the main caldera.

Scientists use the term “aerosol” as a catch-all phrase for many types of small liquid droplets or tiny solid particles that are light enough to remain airborne for long times. Volcanic ash is a type of solid aerosol that can remain in the atmosphere for weeks or months. Volcanic ash is made of small particles of rock - basically a fine powder - blasted out of a volcano. Volcanic ash is hazardous to aviation because ash sucked into jet engines can disable or destroy the engines during a flight.

Large flows of molten lava and enormous, explosive eruptions present obvious hazards to people who live near volcanoes. Volcanoes can also endanger people with clouds of hot gases or sudden floods of debris. Scorching everything in its path, a pyroclastic flow is a fast-moving cloud of extremely hot volcanic gas and ash that hurtles down a volcano’s side faster than a speeding car. A lahar is a sudden flood of mud, ash, and debris that is triggered by a volcanic eruption. Volcanoes are often tall mountains with snow that melts catastrophically when a hot eruption occurs, unleashing sudden, large floods of water, mud, ash, and other debris such as trees.

Volcanoes in or near the ocean can trigger tsunamis when they erupt. Volcanoes near water can also set off huge steam explosions when a smaller eruption breaks open a path for large quantities of water to pour onto molten lava. This causes an enormous blast when the water expands as it turns to steam. Volcanic eruptions can also set off earthquakes.

The types of sensors represented in this game, and the aspects of volcanic activity each can detect, are briefly described below:

The data about the performance and cost of the drone, batteries, cameras, and sensors used in this game was derived from real-world sources. Some assumptions and simplifications were made when specific data was unavailable or, in some cases, to simplify the mechanics of game play. For example, we rounded the costs of all items of equipment to the nearest $50 to make it easier for the banker to make change during game play.

We patterned the drone in the game after the DJI Phantom 4, an extremely common consumer model that is widely used for aerial photography. We estimated its capacity for carrying instruments, in terms of weight, based on the weight of the camera systems typically used with the Phantom 4. To establish the relationship between the drone’s mass and the rate at which it uses the energy in its battery, we consulted a published “flight time vs. weight” graph for a high-end drone that can carry heavy cameras (up to 20 pounds!) and scaled-down those values to represent the smaller Phantom 4. The rate in the game at which the drone spends Energy Units from its battery, based on the payload mass, reflects this reasoning.

Representing the sensors did require a bit more artistic license in order to balance realism with simplicity of game play. For example, in reality, scientists often attach several different sensors to a drone, and those sensors share some equipment such as a data storage system and a fan to suck in air samples. Therefore, a group of two or three sensors in a cluster using shared resources might weigh less than the sum of the individual sensors, assuming each individual sensor needs all of the same supporting infrastructure. To simplify game play, this weight savings by clustering multiple sensors is not reflected in the rules. However, the costs and masses of the in-game representations of instruments are relatively proportional to published price and performance data for actual sensors. A simple GoPro-level navigation camera weighs less and costs less than an infrared camera. A sensor for a gas like sulfur dioxide costs more than a basic humidity sensor. Similarly, advanced, lightweight batteries are available for many drone models but tend to carry a premium price tag.

This game can be played solo or by a small group of 2 or 3 students using a single copy of the game. We recommend groups of 4 students per game setup, with each student responsible for one of four roles (Pilot, Engineer, Scorekeeper, or Banker). If you have several groups play at once, you can choose to allow them to compete with each other if you wish. The teams with the highest scores, the most Science Data Points collected during three flights, would be the winners.

Because of the number of boards, cards, and other elements in the game, students may need direct instruction and strong guidance at the start. Based on play-testing experience, most students become comfortable with the complexity after they have conducted one full mission to the volcano and back.

You can ease your students into the game by having all student groups “walk through” the process of equipping their drones and flying their first mission together as a whole-class exercise. For the first flight, tell all groups to configure their drones in the same way with a simple setup: 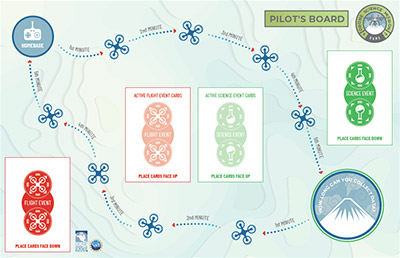 Next, talk your student groups through a flight to the volcano, making sure each group completes each step before having the whole class move on. Aspects of the game to emphasize include:

After the first flight, your students should be comfortable enough with the rules that they can focus on strategy. They will also be familiar with some key details of the game, such as the predominantly negative outcomes of the Flight Event Cards and the need to keep the payload light to allow for a longer stay hovering over the volcano collecting data.

After each flight, conduct a whole-class discussion, encouraging students to compare and share their strategies and experiences during that round. After the first run, where you told them which equipment to choose, they will mostly describe the events they encountered, how much data they collected, and whether they made it back to base. After the second and third flights, their descriptions should also explain their strategies for equipment choices and how those choices worked out.

It is important to allow students to experiment, and sometimes fail, in the choices they make within the game. However, it is also important to keep students from becoming “stuck” or frustrated. Here are some “coaching tips” that you might want to be ready to supply as you observe students playing:

There are ways to make the game simpler, especially for the first time the game is played. These alternatives might be especially helpful for younger students.

There are also ways to extend or customize the game.

Created by Randy Russell at the UCAR Center for Science Education with design and illustration by Sharon Franz White. Thanks to numerous UCAR SciEd staff members for providing feedback on early versions of the game. The initial concept for this game was inspired by the MarsBound and AstrobioBound activities developed by Arizona State University for NASA.