View from a Drone: Make a 3D Model from Your Photos

Drones can take photos that you can analyze later. By planning ahead to have enough overlap between photos, you take those individual photos and make a 3-dimensional image!

When walking on a hike or around the schoolyard, sometimes you see something that is high up on a rock outcrop or on a hill that catches your interest. For instance, a previous forest fire might have left a hillside bare of vegetation to hold the soil in place. How is the hillside starting to shift after rainstorms or snows? Monitoring an area over many months can lead to discoveries about how the erosional processes happen and also provide homeowners, park rangers, planners, and others valuable information to take action to stabilize areas to prevent landslides.

The Challenge: Design and conduct an experiment to take enough photos to make a 3-dimensional image of an outcrop or landform.

The Challenge: Students will design and conduct an experiment to take enough photos to make a 3-dimensional image of an outcrop or landform.

Taking photos from multiple viewpoints can yield better 3d models, so using a drone with a camera onboard, from the ground, a balloon and/or from a tall pole might be useful for the study.

Example - Post-fire hillsides: An investigation to monitor a hillside or road cut for pre-landslide movements such as slumping after a wildfire has removed all of the vegetation.

Have students make a plan

Tell students to sketch a map showing planned route for their drone to fly and from which directions. The map should show where the pilot, photographer, and spotters will stand. Ask students to think about the order & from what angles they will take the photos.

Ask students to sketch a drawing of where the photos will be taken. How far from the outcrop will the drone need to fly and get enough detail for their project? How many photos will students need to take to have 70% overlap? Where: how high, from how far away, how many? When during the day, during the year, after an event? Each photo should overlap the previous photo by 60% - 80%. If multiple rows of photos are taken, remind students to overlap the rows by 60% - 80%. 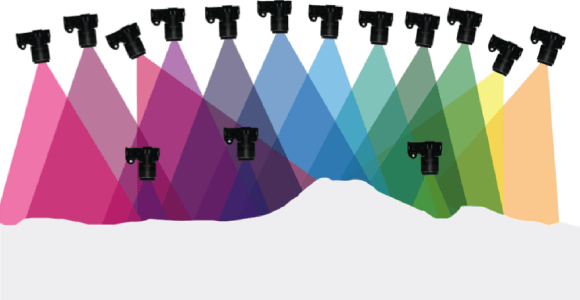 Less effective scans result from only taking photos straight on or in a divergent pattern (as in taking the photos while standing in one spot and turning the camera), such as shown in the image below:

Tell students to think about:

Is it safe to fly a drone? If the study area is near a road, are all students safely off the road?

Have students make a table similar to the one shown below to record their data.

* Are there trees, bushes, grasses at the top of the outcrop? How far do the roots go into the rock? How is the rock where there are roots different than other areas? Color, consistency, staining, etc.

After the investigation, students should show locations of their photos.

Have students create the 3d model(s)

Have students use online software to stitch the photos together to make a 3D image. Two smart device applications are Trnio (Apple iOS) and Scann3d (Android). SketchFab is an online site for showing off their models!

Recap is currently free and allows 50 photos in a model. A single 'row' of photos with lots of overlap (think zig-zag up and down) works well for this application. An alternative is to take the photos with the drone (or other camera) then import them into a 3d model application on a smart device, such as Trnio or Scann3D. There are many applications that will create 3D models, such as Agisoft, that are not free.

How do the models contribute to answering the questions students generated at the start of the activity?

Have students describe what have they learned from data and the project.

The process of taking many overlapping photos to construct a three-dimensional model is often called structure from motion (SfM). This photogrammetric technique has many research applications in geodesy, geomorphology, structural geology, and other subfields of geology. Learn more about this technique in the Geodesy Tools for Societal Issues unit: Introduction to SfM.

It is offered under a Creative Commons Attribution-NonCommercial-ShareAlike license.

Previous Page
How High is My Drone Flying?
Back to Top
Next Page
Comparing Images from Drones with Satellite Images