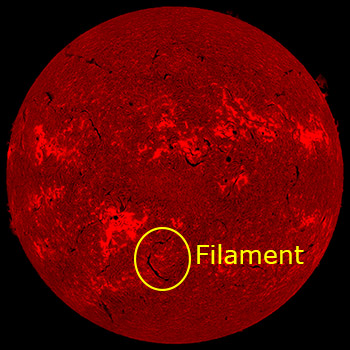 Solar filaments on an H-alpha image of the Sun from July 2000.

Solar filaments are dark lines or curves that sometimes appear in pictures of the Sun. Filaments are actually huge arcs of plasma (electrified gas) in the Sun's atmosphere. They look dark because they are not as hot as the Sun's surface behind them.

Filaments are held in place by powerful magnetic fields in the Sun's atmosphere. They usually appear above sunspots, which are magnetically disturbed regions on the Sun's surface. Filaments can last for several days - or sometimes up to months! Filaments are most common around the peak of the sunspot cycle (called solar max) when the Sun's magnetic field is very active and explosive solar storms are more frequent.

Filaments are actually the same feature as another solar phenomenon - prominences. Prominences stick out from the edge of the Sun and look bright against the dark background of space. However, prominences and filaments are really the same thing - arcs of plasma in the Sun's atmosphere held up by magnetic fields - just viewed from a different angle.

Filaments are most easily seen in photos of the Sun taken with a filter that only transmits a specific wavelength of red light. That color of red is called the hydrogen-alpha (or H-alpha) band. It is emitted by hydrogen atoms, the main constituent of the Sun. H-alpha light has a wavelength of 656.28 nanometers (6,562.8 Ångstroms).