Students will test the ability of a UAV (Unmanned Aerial Vehicle or "drone") to lift and carry a weight. The weight simulates a payload, such as sensors or supplies, transported by the UAV.

We recommend that students complete the Learn to Fly! UAV Flight School activity as a prerequisite to this activity.

This activity can serve as the first scientific, quantitative analysis of UAV performance after students have learned to fly UAVs with basic proficiency. This activity provides additional opportunities for students to gain more experience and hone their skills flying a UAV.

Prepare the UAV and Payload 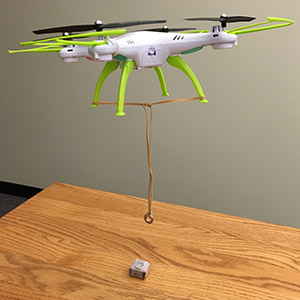 The initial concept for this activity was developed by members of theEarthScienceInformationPartners (ESIP) Education Committee, which focused their 2016 educational efforts on the use of UAVs in education.

Further development of this activity was conducted byRandy Russellas part of his work at theUCAR Center for Science Educationas part of Engineering Experiences, a National Science Foundation-funded ITEST project (Award #1513102) with the Division of Research on Learning in Formal and Informal Settings (DRL). Engineering Experiences is designed to introduce and engage middle-school students to engineering during out-of-school time, and foster long-term interest and pathways into the field. Any opinions, findings, and conclusions, or recommendations expressed in this activity are those of the author and do not necessarily reflect the views of the National Science Foundation.