If a friend gave you a glass of murky brown water, would you drink it? If you were thirsty enough, you might! But you would probably avoid it because it is unhealthy. You need water to survive, just as you need air. Unlike that murky glass of water, however, it’s hard to tell when the air you breathe is harmful to your health. For the most part, the air you breathe is good for your body, but there are some negative health effects that come from polluted air and some ways you can avoid it. 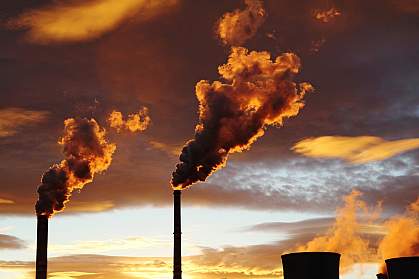 Because of human activities like heating/cooling, manufacturing, and motorized transportation, harmful substances are released into the atmosphere. These noxious gases and chemicals form ground-level ozone and particulate matter, two major components of air pollution. While modern developments have made life easier for us in some ways, our environment and our health are suffering.

Asthma
Though it isn’t a direct cause of asthma, air pollution can increase the frequency and severity of asthma attacks. Excessive ozone and particulate pollution causes inflamation of the respiratory tract. During an asthma attack, the airways are so swollen from inflammation that air struggles to move through them. A person having an asthma attack is not receiving the oxygen their body needs to function, which can lead to coughing, wheezing, and blue fingertips. Asthma can usually be managed with medication, but in more severe cases a person must seek immediate medical treatment.

Bronchitis
Like asthma, bronchitis is an inflammation of passages in the lungs, but it includes more mucus production and heavy coughing. Chronic bronchitis is more common for people who live near power plants and factories or in cities, where they are exposed to more pollutants in the atmosphere. Highly industrialized nations, like Irelend and the United Kingdom, have the highest number of deaths due to respiratory diseases per year. Prolonged bronchitis can lead to other diseases, like Chronic Obstructive Pulmonary Disease (or COPD), which can cause premature death, particularly in those who smoke.

Cancer
In 2013, The International Agency for Research on Cancer (IARC) declared outdoor air pollution as a cause for lung cancer and an increased risk of bladder cancer. Cancers caused by air pollution are more common in Europe and other developed areas. The number of U.S. cancer cases that are directly connected to air pollution near urban areas is increasing as well. A study published in 2002 found that there is a correlation between aerosol use, burning fossil fuels, and cancer rates.

Other Health Effects
While respiratory conditions are commonly considered to be the main effects of air pollution, there are other dangers to human health, such as heart conditions, skin conditions, and preterm birth.

Taking Care of Your Health
Because many air pollutants are colorless and odorless, it can be hard to tell when the air is harmful to breathe. Fortunately, AirNow provides a current air quality index report for locations in North America. High indexes often occur during summer afternoons near urban areas. You should plan to stay indoors at those times. Or, you might consider taking in a breath of fresh air in the country, the beach, the woods, or the mountains.

Do your best to keep your indoor air clean by not smoking and cleaning your home’s air filters frequently. You can also help to keep outdoor air clean by avoiding aerosol sprays and styrofoam containers, recycling, getting around without fossil fuels, and conserving energy.