Can We Limit the Amount of Sunlight to Stop Climate Change?

Large volcanic eruptions are able to send gases high in the atmosphere. These gases (mostly sulfur) form particles called aerosols that can travel worldwide, reducing the amount of sunlight that gets to the Earth’s surface. This happened in June of 1991 when Mt Pinatubo erupted. The climate cooled about 0.3℃ (0.5°F) for a couple of years. Researchers are looking at ways to engineer a similar effect — shading the planet and helping to cool our climate.

Blocking some solar radiation from getting to Earth could involve sending gases or particles into the atmosphere like volcanoes do. It could also include methods like making clouds or the Earth’s surface brighter so that they reflect more sunlight back out into space. Methods like these could help slow climate change. 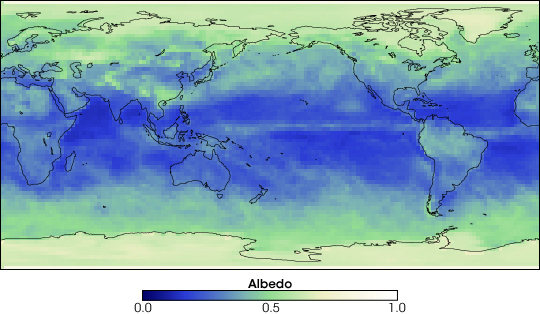 While Earth’s albedo is 0.3 on average, which means that about a third of solar energy is reflected back out into space, albedo varies worldwide, with more energy reflected near the poles than near the equator.
Credit: NOAA

Researchers are looking for ways to increase the albedo of Earth, because If less solar energy is absorbed by the planet, then the surface of the Earth will cool. This concept is called solar radiation management. Two examples include: 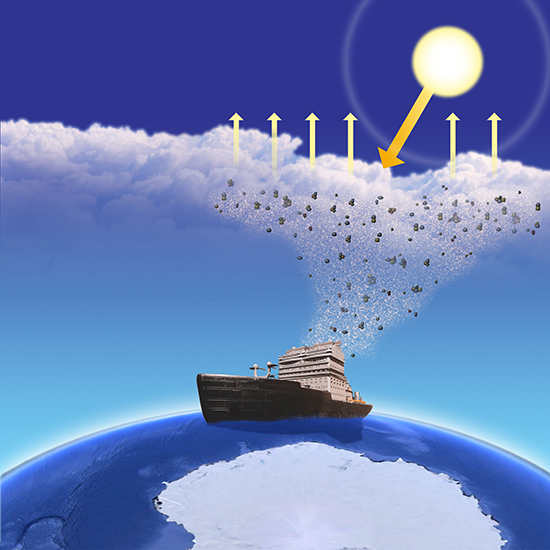 Illustration showing how particles of sea salt or other aerosols released from a ship over the Arctic could help create brighter clouds that reflect more incoming solar energy away from Earth.
US Department of Energy, Office of Science

While these methods have not been developed yet, they are thought to be inexpensive compared to other ways to cool the climate, and they could do it quickly. However, changing the albedo of our planet could be risky. For instance, we could cool the climate too much. In the past when large volcanic eruptions cooled the climate, like during the Year Without a Summer, crops died and people went hungry. Modifying clouds and adding sulfur dioxide to the stratosphere could also have unintended consequences, which are still unknown. Both could cause changes in rainfall and weather patterns. Adding aerosols to the stratosphere could also affect the ozone layer, which protects Earth from harmful ultraviolet radiation. If there was a way to test these techniques and monitor the effects, we would know if they cause too much cooling or have other unanticipated effects.

Because of the unknown risks of solar radiation management, a report by the National Academies concluded that “albedo modification at scales sufficient to alter climate should not be deployed at this time.” Researchers are working to learn more about these methods and how they could be used safely, but at this time, we don’t know enough about them or whether they will work the way we want them to.